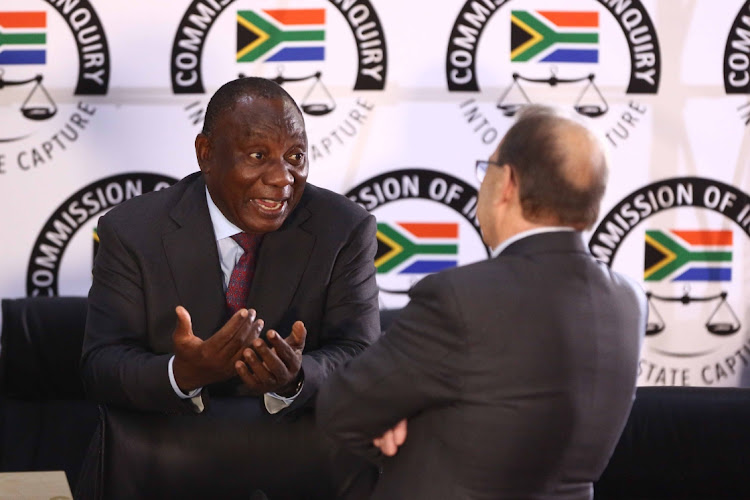 President Cyril Ramaphosa is accused of possibly perjuring himself when he testified at the Zondo commission by omitting to tell it about his knowledge of the alleged use of state funds for an internal ANC campaign. File photo.
Image: Thapelo Morebudi

President Cyril Ramaphosa may still find himself appearing before parliament’s standing committee on public accounts (Scopa) over a leaked recording of an ANC NEC meeting that suggested state funds were misused for an internal party campaign.

This is despite the suspension of ANC MP Mervyn Dirks, who had written to Scopa late last year asking its chairperson to summon Ramaphosa.

Dirks, who is an ANC whip in the committee, was issued with a letter of suspension by the ANC chief whip this week after he refused to withdraw the letter.

In the letter, he insinuated that Ramaphosa may have perjured himself when he testified at the Zondo commission by omitting to tell it about his knowledge of the alleged use of state funds for an internal ANC campaign.

Dirks is aligned with the ANC faction opposed to Ramaphosa, known as the RET forces.

After the letter suspending Dirks, the matter appeared to have fallen away, but Scopa chairperson Mkhuleko Hlengwa said the committee would go ahead with the complaint even though Dirks had since been withdrawn from the committee as part of his suspension by the ANC caucus.

“The reported suspension of Mr Dirks has no material bearing on the matter at this point because the committee reserves the right to invite or summon any person to appear before it to provide information, evidence, or representation.

“Furthermore, a withdrawal of the letter, if it were to arise, does not conclude the matter without due process, as a report would still be required of the committee. The matter is now a subject of parliamentary process and the committee is seized with it and will take decisions it deems fit,” Hlengwa said in a statement on Friday.

He said the committee was responsible for ensuring parliamentary oversight and accountability.

“Notwithstanding the associated politics, the committee will, as it now does, conduct its work with integrity and comply with the rules of parliament.”

Hlengwa confirmed that the committee would sit on Tuesday next week to deal with the matter.

He said after receiving the letter from Dirks, he informed parliament's chair of chairs  Cedric Frolick, who is also an ANC MP.

“During the recess period I directed the Scopa staff to begin gathering information to ensure that I could properly brief members of the committee about this matter, because without a doubt its seriousness was vivid.

“The work referred to included engaging with parliament’s legal services. A sound legal opinion has already been finalised and is due to be tabled to the committee.”

President Cyril Ramaphosa has reprimanded tourism minister Lindiwe Sisulu over her controversial article attacking the judiciary and the constitution.
News
3 months ago

SA is reconsidering the national state of disaster as the rate of Covid-19 infections dip, President Cyril Ramaphosa said on Wednesday.
News
3 months ago
Next Article