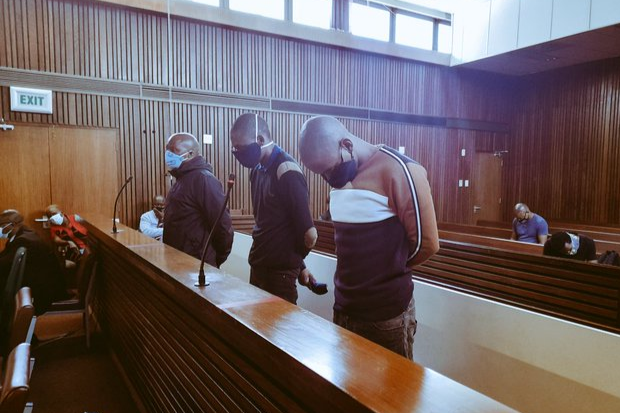 This is how a Mpumalanga judge labelled the three men found guilty of killing a teenage girl living with albinism and her nephew as he sentenced them to life imprisonment.

Thokozani Msibi, 36, Knowledge Mhlanga, 26, and Brilliant Mkhize, 28, were sentenced to life imprisonment each for the murders of Gabisile Shabane and her 15-month-old nephew Nkosikhona Ngwenya on January 28 2018.

The men were also each slapped with five years for house breaking, four years for pointing of firearms at Gabisile's mother Annah Shabane and Mpumi Shabane on the day of the kidnapping and five years for abduction.

The trio also got eight years for violation of a corpse.

The community of Hlalakahle in eMalahleni, Mpumalanga, came out in numbers to support the Shabane and Ngwenya families as the Middelburg High Court ...
News
2 years ago

Before handing out the sentence, Braukmann said he wanted to set an example with the accused for what he called one of the worst and gruesome muthi murders he has ever seen as a judge.

Braukmann said the trio did not deserve to be called human beings.

"Gabisile's mother asked me to sentence all of  you to ten lives each and I wish I could but a can't. I have to look at each count and give out a sentence fit for each crime and ensure that the victims and families are satisfied," the judge said.

"It funny that they (accused) went to seek help from a traditional healer who later turned all of them in trying to duck the law and stay away from prison. But the wheels of justice moved fast."

Braukmann said Mpumalanga was seeing a rise in muthi killings because of myths and false claims that people's body parts would help grow the harvester's riches.

This is the opportunity to show the country how the community feels about the acts of these men.

He said people living with albinism should not be hunted for making muthi.

"The abuse and attacks of children and women has become a norm in society," said Braukmann.

Refilwe Mtsweni has vowed to help fight the killing of people with albinism.
News
4 years ago

Braukmann said he wanted  to send a strong  message that neither killing people living with albinism or animals will ever perform miracles.

He said the myths and false beliefs by traditional healers leads to the killing of animals was barbaric and there was no scientific evidence to prove the myth.

He said the society needed to strongly condemn the acts.

"These crimes cut short the lives of many and are uncalled for. We need to educate the community on the stigma and discrimination for people living with albinism. They are also humans and have the right to life. We need to stop seeing them differently."

He said believing this was pure witchcraft.

"They were not remorseful and did their best [and] misled the court. Accused number two had the chance to refuse being part of this but went ahead. Their greed for money and belief in witchcraft made them (accused) slaughter them (Gabisile and Nkosikhona) like animals."

Braukmann said the case  gave him sleepless nights after seeing all the graphic pictures from the crime scenes.

"I could not eat for days and left it [in] my office because it was too scary and traumatic for anyone to see. I had to even protect my wife and children from ever seeing the gruesome and demonic nature of the events of the murders of the two children."

Braukmann said all the five men who took part in the killings – including teacher Themba Thubane who was sentenced to life in 2019 for his role in the double murder and Mfanasbili Gamedze who died in detention in his home country of Eswatini – were selfish.

The accused wants the court to disregard the confession statement he made to police about the January 2018 abduction and killing, saying it was made ...
News
9 months ago

John Magutshwa has revealed how the accused in the murders of a teenage girl living with albinism and her 15-month-old cousin steamed using muthi ...
News
9 months ago
Next Article