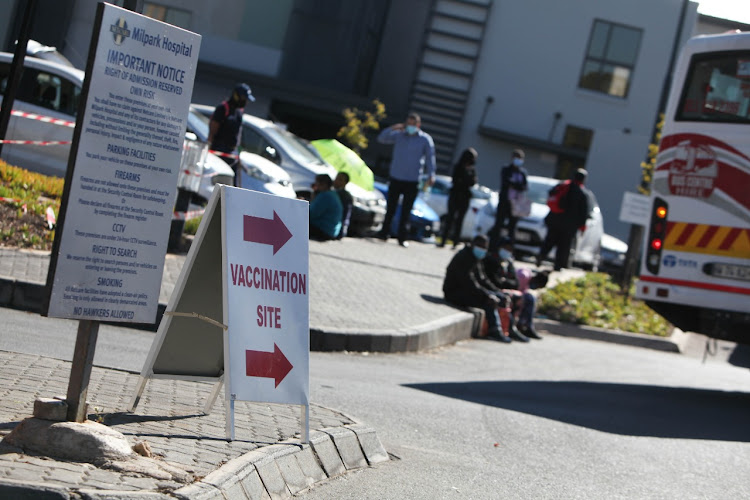 Healthcare workers queued to get the vaccine rolled out for the Sisonke programme at Milpark Hospital in Johannesburg on Thursday, May 13 2021.
Image: Alaister Russell/Sunday Times

Please wait for your turn and don't try to jump the Covid-19 vaccination queue.

That was the message from Dr Keith Cloete, head of health in the Western Cape, who said on Thursday there had been “worrying and unfortunate” incidents of people — who did not meet the criteria — gaming the system under which health sector workers were vaccinated in the Sisonke programme.

Cloete said the Sisonke programme had “widened its criteria” for eligibility but it still only applied to those in the health sector. The vaccine is being rolled out to people over the age of 60 on Monday.

“Nobody should be jumping the queue. We should all be adhering to rules, people must wait their turn,” he added.

A video posted on Twitter by a technology and motoring journalist who wrote: “I got the vaccine,” has ignited a fierce debate about the issue.

A series of tweets by media personality Lebo Mashile on her receiving the Covid-19 vaccine were met with condemnation and indignation by other ...
News
1 year ago 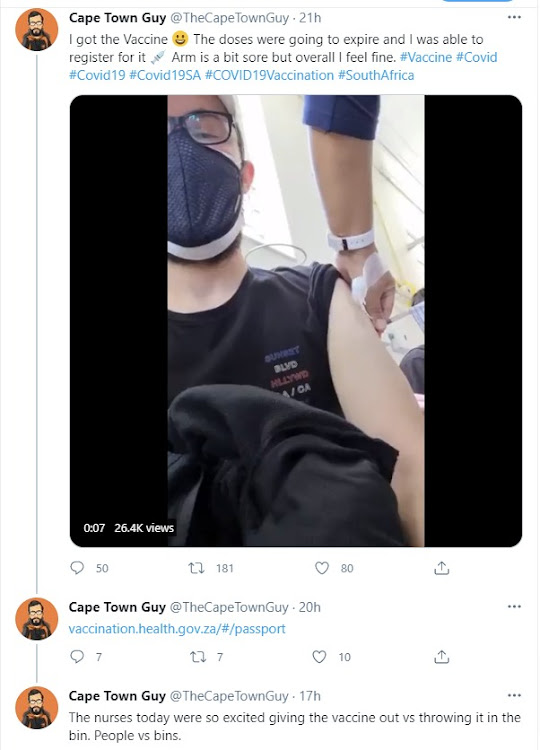 The tweet thread, subsequently deleted, ignited fierce debate online around who was eligible for the vaccine administered as part of the Sisonke programme.
Image: Cape Town Guy/Twitter

Cloete, speaking during a virtual briefing, said there had been “worrying and unfortunate incidents of people jumping the queue who did not qualify” and that the province was thus “working with Sisonke to address this behaviour”.

“I want to state emphatically that there has been so much fake news via the public and social media over the past four days. Because Sisonke was an access trial, the vaccines used were prepared for its trials. The undertaking with Sisonke is that they would need to be used by a certain date,” he said, adding that according to normal research protocol, it was stated that any unused vaccines would need to be returned.

As a result, Sisonke expanded the criteria beyond front-line workers but it was still only for those within the health sector.

He said, “it is purely for healthcare workers within the expanded definition under trial conditions. Unfortunate episodes have arisen as some people used this situation opportunistically to jump the queue.”

He said that by their nature, the new criteria had relied on honesty and good faith but that some had abused this.

“It is almost impossible to track if those showing up for vaccines misrepresented themselves and this makes it easier for people to override the system,” he said.

Premier Alan Winde said it was “absolutely not acceptable to cheat the system and push your way in front of either vulnerable people or those in the health sector. Queue jumpers make it hard for everyone else.”

At the briefing it was revealed that 30,000 Pfizer vaccinations were arriving in the province on Thursday, ahead of the rollout next week.

“Our key focus next week will be to use the first tranche of 33,900 vaccines available to us to vaccinate those registered in old age homes across the Western Cape,” said Winde.

“This will be done at old age homes, on-site. Some 17,000 people living in old age homes have already registered and are on the database.”

It was also confirmed that the province was now officially seeing a resurgence in Covid-19 cases but was not yet in the third wave.