'She cried in my lap': Tears flow at memorial for bullied Lufuno Mavhunga 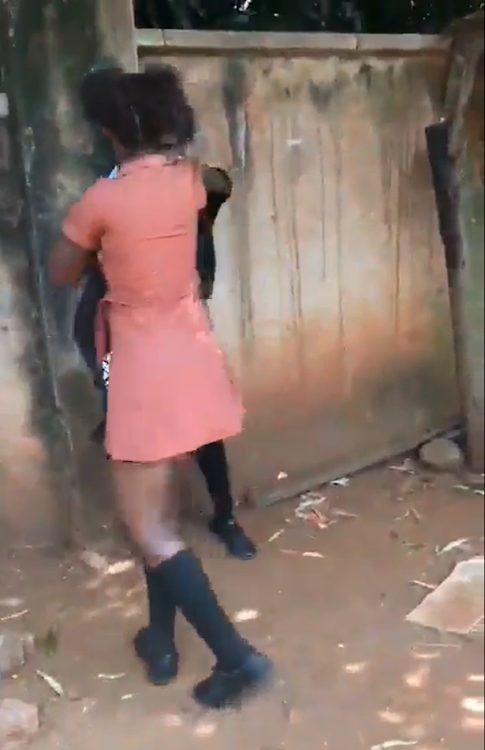 The memorial service of Lufuno Mavhunga was held at Mbilwi Secondary School, where she had allegedly been beaten and bullied.
Image: Screengrab

A close friend of Limpopo school pupil Lufuno Mavhunga, who allegedly took her own life, said on Friday the teen was broken after being bullied and beaten.

Taking to the podium at Lufuno’s memorial service at Mbilwi Secondary School in the Vhembe district in Limpopo, Mukoma Tshinakahi battled through a tribute as she explained how her friend had been battered and bruised.

“Our hearts sank when we saw the bruises on her face, despite her being innocent,” she said.

“What was her crime? Being silent? Being nice? I was fuming when she cried in my lap and I couldn’t do anything,” the teenager dressed in school uniform said, bursting into tears.

A piercing cry could be heard coming from the audience in the school hall which Lufuno’s mother had earlier entered, propped up by two other people. Among those attending the service were education department officials, Lufuno's classmates, teachers and her family.

News of Lufuno’s death made headlines after it was found that the 15-year-old girl took her own life by overdosing on pills last week just hours after being beaten by another pupil.

Footage of the incident was shared on social media. It showed Lufuno being repeatedly slapped in the face, but not fighting back, after being confronted by two pupils.

A pupil could be seen trying to come between the bully and Lufuno as the slaps continued and Lufuno tells the attacker she is getting hurt.

SowetanLIVE reported that the pupil allegedly attacked Lufuno because she had blocked her on WhatsApp and Facebook. This was after Lufuno had allegedly received insulting messages.

While Tshinakahi said she hoped God would ensure that her friend got justice, Lufuno’s older brother took to the podium to implore parents to play a more active role in their children's' lives, to ensure such incidents never happened again.

“We are here to say to the nation that maybe we do have this problem of bullying. Maybe as a nation, there is something we can do. Maybe it is high time we stand as parents and take up our responsibility in our respective homes,” said Dakalo.

“I know I am not qualified to tell you about parenting, but what I know, and what I have seen in that video, is that there was someone’s child that was assaulting my sister. I do believe that child comes from a certain family and there are parents in that family. That is why I am bringing it back to you, that maybe it is high time we understand our children and make sure we are involved in raising them,” he added.

He said while some may call for a celebration of Lufuno’s life, accepting her death was a bitter pill for the family to swallow because she was so young.

“We know some of you may say we just have to celebrate her life. It’s not that easy, because she was just a girl of 15 years. Whatever happened to her was something so heavy she could not take it any more. As a family, we have lost a daughter, sister and granddaughter,” he said.

As the service got under way, the pupil accused of assaulting her was due to appear in the Thohoyandou magistrate’s court. Proceedings would be held in camera because the accused is a minor.

The school governing body announced a seven-day suspension for pupils linked to the bullying of Lufuno.

One person watching the memorial service online commented: “​I still feel Mbilwi Secondary School should be renamed after her ... it will be a great honour, plus her story should not be forgotten.”

Lufuno Mavhunga from Nzhelele in Limpopo allegedly committed suicide after a video of her being bullied by fellow pupils went viral.
News
3 weeks ago

Action to be taken against teachers at Lufuno Mavhunga's school after viral video, says Angie Motshekga

Lufuno Mavhunga allegedly committed suicide after a video of her being bullied by another pupil went viral.
News
3 weeks ago

Teachers trained as life coaches and the introduction of conflict resolution mechanisms within the school community are among the recommendations of ...
News
3 weeks ago
Next Article