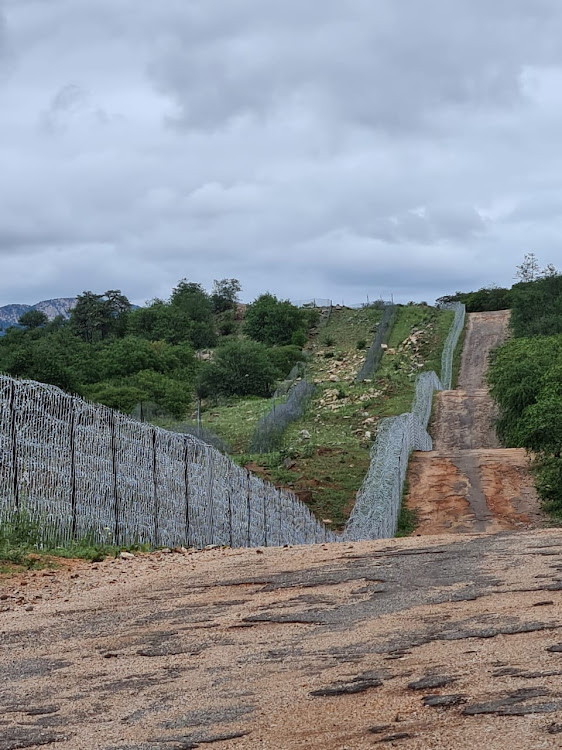 The R37m 40km fence built along the border of SA and Zimbabwe will not be repaired despite the recommendations of the standing committee on public accounts (Scopa) - because it's just not worth it.

This was according to a response on Friday by minister of public works and infrastructure, Patricia de Lille, to questions by the National Assembly.

The controversial 1.8m tall fence - jokingly referred to as the “washing line” because of its poor quality and the ease with which it can be breached - consists of six rolls of coiled razor wire and a razor wire grid erected over three weeks by Magwa Construction.

The company was carrying out maintenance work at the Beitbridge border post when the national lockdown was declared in late March.

In May, De Lille told MPs that the fence had been up barely a day before it was breached.

On April 20, she had requested an investigation by the auditor-general and five days later asked the public works anti-corruption unit to investigate, assisted by SIU members seconded to the department. The investigation revealed a litany of incompetence and wrongdoing in the construction and recommended disciplinary action against 14 government officials.

Questions relating to the rectifying of fence defects, the delays with compliance of the orders, the disciplinary action against the contractors and their existing contracts with the department were put to the minister on February 11.

Parliament's standing committee of public accounts has slammed plans by the department of public works and infrastructure to repair the shoddily ...
News
8 months ago

Two companies involved in the construction of the Beitbridge border fence on Tuesday challenged the powers of the Special Tribunal to adjudicate on ...
News
9 months ago

On Friday she responded.

De Lille said an accounting officer had performed a detailed technical condition assessment of the fence and the outcome was found to be against the recommendations of Scopa - which was to rectify all physical defects in the fence “in line with all applicable regulations”.

“As the fence, in its current form, is not fit for purpose and in material non-compliance with the specifications, the department has taken a decision not to entertain the possibility of any further repairs of the fence.

“Any further border fence initiatives will be located in the context of the integrated border management solution under way. In this regard, the site clearance process is aimed at being completed by June this year.”

She said a best practice approach on border security, in consultation with the department of defence, would be published by the end of March 2021.

De Lille said security vetting for supply chain management personnel was a lengthy process and the reason was that only seven vetting officials had to vet 253 bids.

She described a protracted process, which included completing lengthy documents, after which officers had to go and interview the official being vetted, compile a report, as well as undertake a polygraph test. Once this was completed, the files had to go to security clearance, which could take up to a year to process.

The department of public works has been criticised over its treatment of Magwa Construction, the company involved in the controversial Beitbridge ...
News
10 months ago

The Special Tribunal on Friday granted the Special Investigating Unit permission to institute proceedings against two contractors that were allegedly ...
News
1 year ago

But the department had requested that the vetting files be a top priority at the State Security Agency (SSA).

Regarding disciplinary action towards the principal contractor, De Lille said it was recommended that the principal agent and the main contractor be restricted from doing business with the government, subject to the Treasury agreeing that their engagement with the department was irregular.

She said there was a delay in the evidence being released before the Restriction Committee and Authority (RCAA), as the chairperson of the RCAA was one of the officials cited in the report and subject to disciplinary action.

On February 26, the RCAA issued letters to the contractor and consultant asking why the department should not recommend to the National Treasury that they be restricted from doing business with the state.

The authority has given the service providers 14 days to provide their written representations and estimates that the process will be finalised by mid-March.

“The department is further seeking legal advice as to whether the conduct of the respective companies in relation to the Beitbridge contract constitutes sufficient grounds to seek termination of their remaining contracts with the department. The matter is under legal review.”

In August last year, an investigation which revealed a litany of incompetence and wrongdoing in the emergency construction of the fence was released.

According to the executive summary of the investigation report: