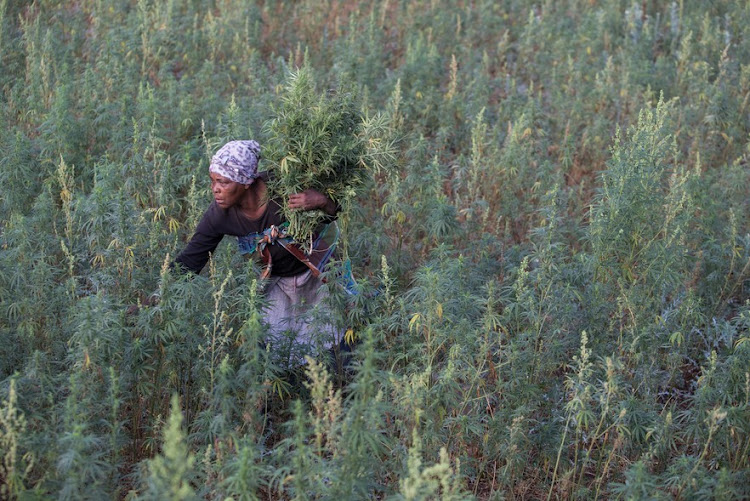 On a frigid September morning in Mkumbi, a remote village in the Pondoland region of the Eastern Cape, 63-year-old Sizane Nompethu rose at dawn and walked at a brisk pace down a rocky path to work her family’s small plot of land, just as she had every day since she was 15.

“I am old and you can see this is very hard work,” Nompethu told GroundUp as she cut through swathes of tall green marijuana shrubs with a small, curved knife, quickly amassing dense bunches that she cradled in her free arm. “But this is all we have. It’s how we raise our children.”

No one knows with confidence how many small-scale cannabis farmers there are in South Africa, but the number is large: one organisation estimates 900,000. Millions of people probably depend on income from cannabis. Here in Pondoland, these growers have been cultivating the plant for over 200 years, with most of their harvest in more contemporary times bound for Cape Town townships and taxi ranks, as well as other South African cities. 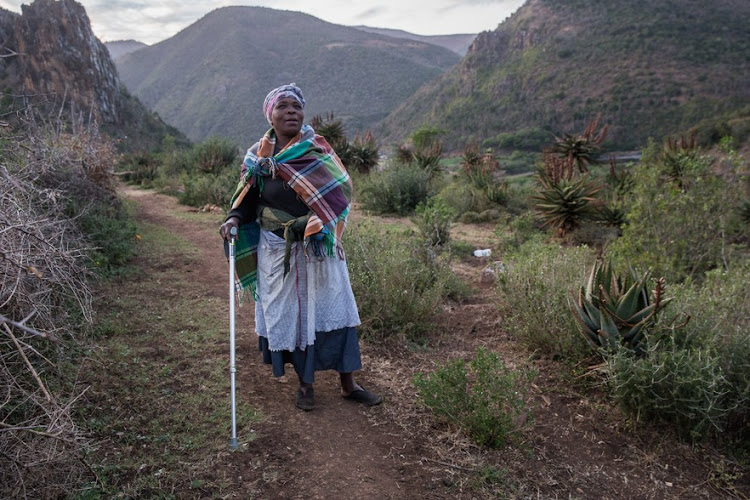 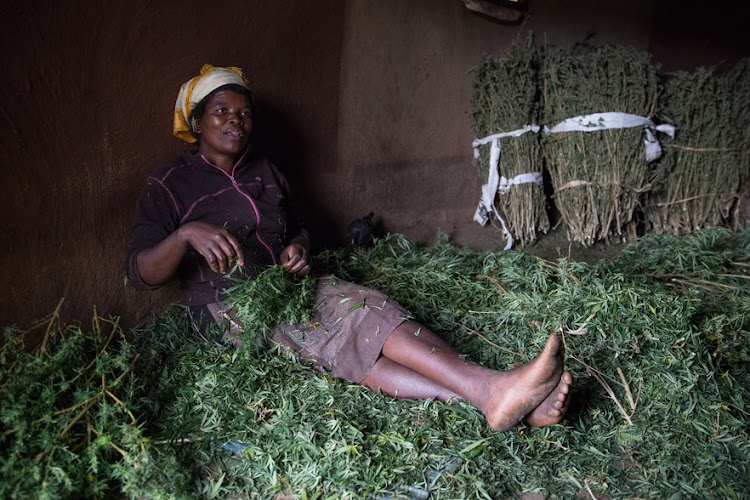 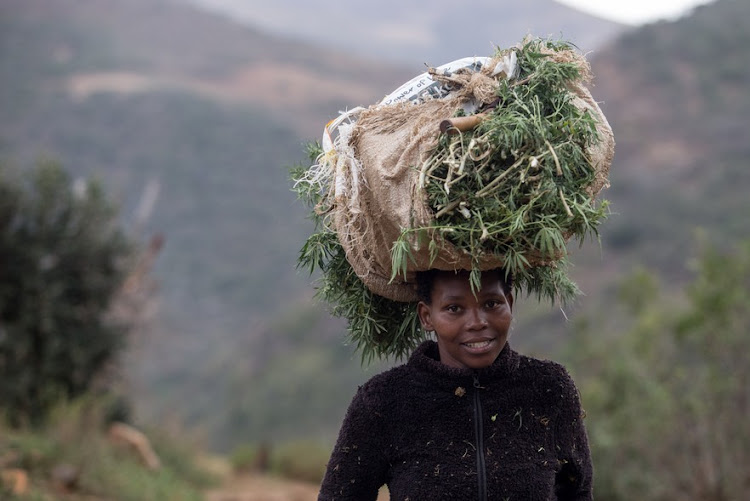 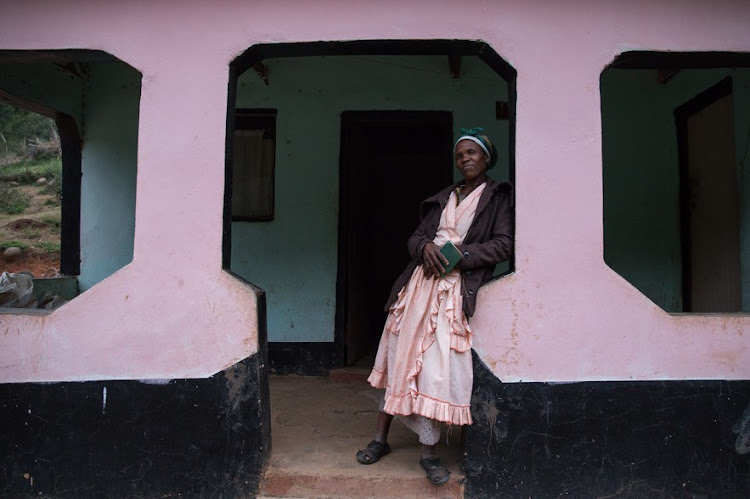 Pondoland is among South Africa’s least economically developed regions, and in Nompethu’s village, as in many of the rural settlements that punctuate this landscape of rugged, verdant mountains and plunging valleys, dagga is the only cash crop in a subsistence economy.

There have been a number of failed efforts to eradicate the plant from the area. Nompethu recalled a period in the 1970s when SAPS officers would ride into the village on horseback (even today, the village is an arduous hour-long trek and a river crossing away from the nearest dirt road) to conduct arrests or confiscate and burn crops.

Around 1990, police drug squads switched tactics to an annual programme of spraying a herbicide called glyphosate from helicopters onto the crops.

As GroundUp previously reported, despite mounting evidence of the severe health risks and environmental damage caused by glyphosate, the spraying continued until as recently as 2016.

But while the Pondoland farmers doggedly resisted these previous attempts to erase their traditional livelihood (with the help of a small group of cannabis activists), many now fear a new threat: legalisation.

In a landmark decision in September 2018, South Africa’s Constitutional Court ruled that “the use, possession and cultivation” of cannabis in “private dwellings” was not illegal. The court gave Parliament 24 months from the date of the judgment to bring the ruling in line with South African laws, with a new bill expected to be released soon.

“I’m worried that now everyone will be able to plant their own dagga in their own homes, so we won’t be able to make money from selling what we are growing here,” said Thuliswa Gumbe, a 43-year-old neighbour of Nompethu’s, as she sat on the floor against the wall of her rondavel picking buds from a large pile of cannabis.

“Even at the end of last year, the buyers were very scarce, so prices were down,” she added. 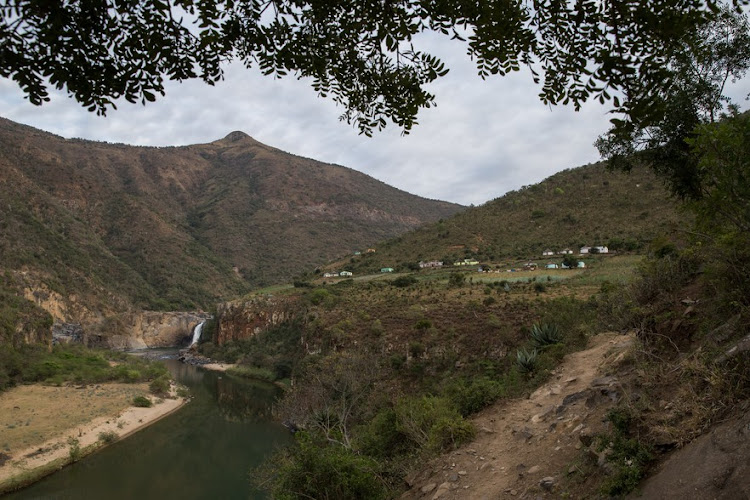 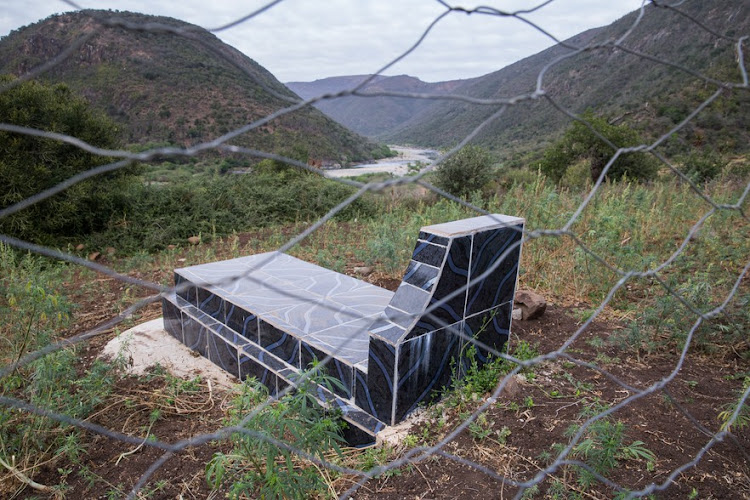 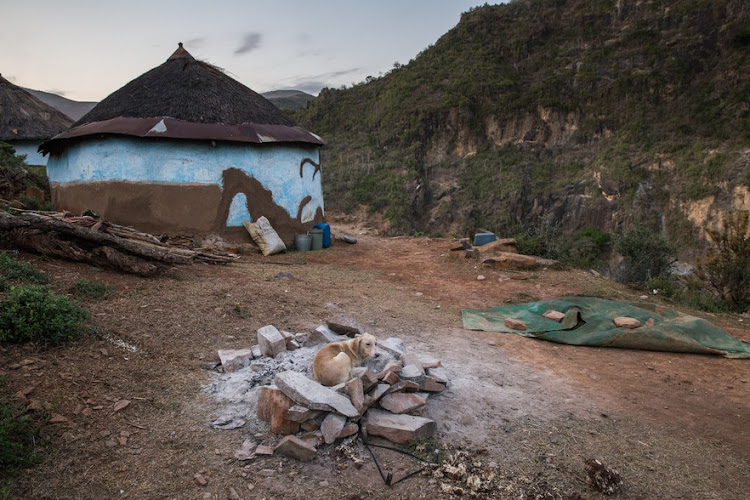 Like most of the villagers, Gumbe’s family have been cultivating cannabis here for generations.

Many of the local women, including Gumbe, are widows; their husbands often left the village to work in the mines and never returned. With the younger generation increasingly seeking education and employment in nearby towns and cities, the bulk of the growing is therefore left to these women, who are often their family’s primary breadwinners.

Gumbe said that she still suffered from chest problems that she had developed during the years of sustained glyphosate spraying, a common complaint in Mkumbi. With the isolated villagers receiving scant information about the current legal status of cannabis, Gumbe said she still feared that the helicopters might return.

At a recent community meeting in another nearby village called Mantlaneni, scores of growers echoed such fears. They also reaffirmed Gumbe’s assertion that prices had fallen since the 2018 court ruling. 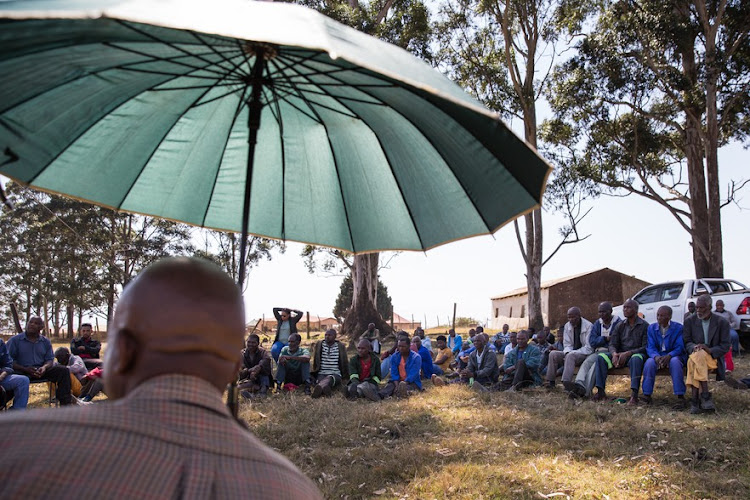 “It used to be R1,000 for one 20 litre container,” said Beecee Nombanga, a local community leader. “Now it is about R500. There is always some fluctuation of prices depending on the season, but this is a bigger drop than usual, because now there is more supply than demand.”

Local farmers also claim that there has been an increase in police activity and arrests and seizures on regular cannabis transport routes out of Pondoland in recent months, further affecting demand.

SAPS officials failed to respond to multiple requests for comment on this.

Novakalela Mbuzeni, 52, told GroundUp that her son had been arrested transporting cannabis from the village to Durban in November last year and is now serving a four-year prison sentence in Maritzburg.

“He was just trying to provide for his family,” Mbuzeni said. “The government must also legalise selling [for recreational use] so that they can release my son and we can work freely.” 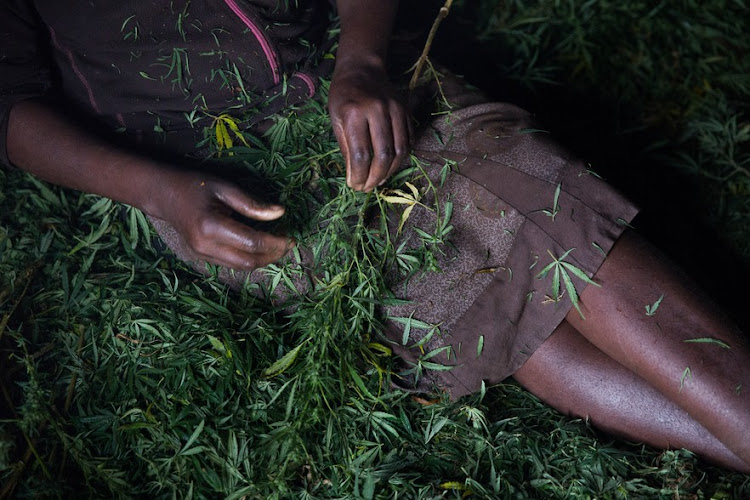 Most of the cannabis from Mkumbi ends up in townships and taxi ranks in Cape Town, as well as other cities.
Image: Ashraf Hendricks

Currently, the only route into the legal cannabis trade in South Africa is by obtaining a South African Products Regulatory Authority licence for medical marijuana cultivation, a booming industry that could be worth up to R27 billion in South Africa by 2023, according to consultancy group Prohibition Partners.

But for rural farmers, there are considerable barriers to entry, including an extensive list of quality control measures and infrastructure that needs to be implemented, accompanied by prohibitive costs.

According to Nico Kriek, managing director at the Cannabis Compliance Bureau, it can cost up to R6-million to set up a facility to the required licensing standards and prepare a licence application; the application fee alone is approximately R20,000.

The current regulations also forbid anyone with a criminal record for any form of drug-related offence from applying for a licence, which further restricts a number of small-scale growers.

In recent months, Eastern Cape premier Oscar Mabuyane has frequently reiterated the importance of ensuring that small-scale cannabis farmers benefit from the commercialisation of the plant. At a cannabis stakeholder engagement in East London in August, Mabuyane said that local government saw the potential to develop a “thriving, legal cannabis economy in our province to create jobs for our people,” but that the rules “for massive economic production are still unclear”.

“We must overcome this hurdle speedily so that legislation around cultivation can be clear to everyone concerned, particularly the police and communal farmers,” Mabuyane added. 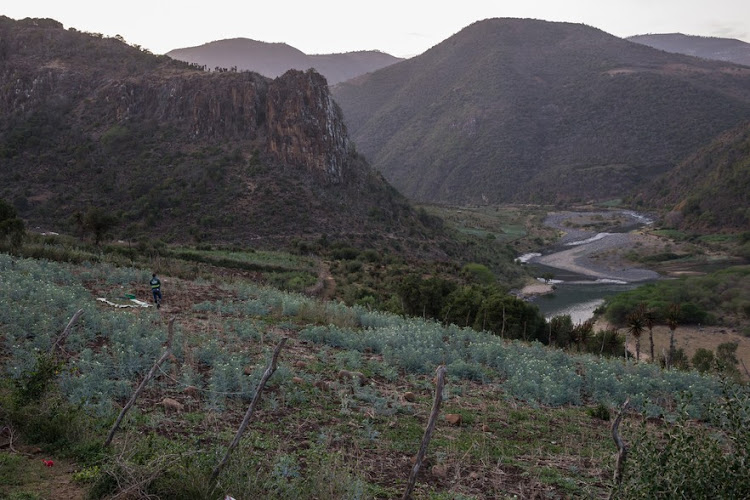 Attorney and cannabis activist Ricky Stone, along with Umzimvubu Farmers Support Network, a local NGO, is currently working with the Eastern Cape government to develop an inclusionary model for the province.

Stone said that government should consider Lesotho as a cautionary tale. In 2017, it became the first country in Africa to allow cultivation of cannabis for medicinal purposes. However, an exorbitantly expensive licensing process, which is mired in corruption allegations, has ensured that the market is dominated by foreign companies.

“It’s not really benefitting their country,” said Stone. “Lesotho has issued over 100 licences, but for any capital that comes in, all the profits go out. Meanwhile, the rural farmers outside of licensed premises are still being persecuted and arrested.

Back in Mkumbi, most of the villagers interviewed by GroundUp had little sense of the rapidly changing regional climate with regard to cannabis, and what this might mean for them.

“No one from government has been here to speak to us,” said Gumbe. “It would be good if they can assist us, but I also worry that they will take everything for themselves and we won’t see any benefit.”

The following morning, a lean and greying 55-year-old man called Mfundiso Mgwenyi, a cannabis buyer from another nearby village, bartered with two local women as they measured out 40 litres of recently-harvested cannabis in plastic containers, which Mgwenyi then poured into a large hessian sack. 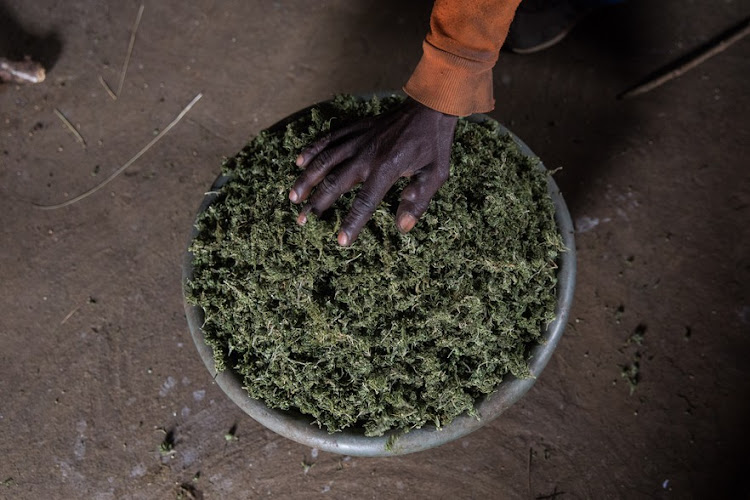 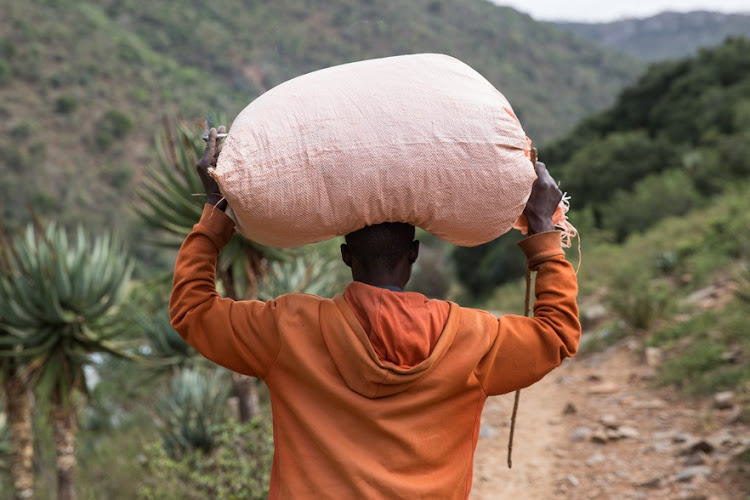 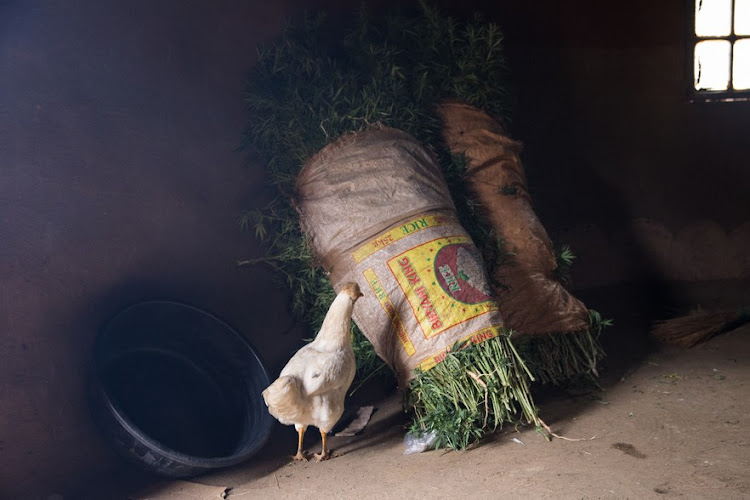 Having eventually settled on a price of R1,400 for the load, Mgwenyi will go on to sell the cannabis at a slightly marked up price to buyers from Cape Town, who will then arrange transportation to the city.

Mgwenyi told GroundUp that 2019 had been a particularly bad year for business. Demand was down, and “police are on the lookout more than before,” he said. “In June, they confiscated 180 litres from this area on its way to Cape Town and the drivers were arrested.”

Mgwenyi used to work as a forklift driver in gold mines in Gauteng, but was retrenched 15 years ago, as the industry began to suffer amid a steep decline in gold deposits and prices. He now supports his wife and seven children on the money he makes from cannabis, which he says might amount to about R2,800 in a good month.

Along with some of his fellow villagers, Mgwenyi has helped to form a cooperative to campaign for small-scale growers and buyers like him to be able to sell locally-grown cannabis legally to bigger licensed operations where it could then be processed for medicinal purposes.

“I want to be able to sell freely without fear of arrest, otherwise I don’t see how any of these changes that everyone is talking about will help us,” Mgwenyi said.

His business done for the day, he lifted his full sack of cannabis onto his head, waded carefully across the river, and began the steep hike home.

People named and photographed in this article not only gave permission for their real names to be used, but emphasised that GroundUp must name them.

Cape Town wants to wade into the "untapped sector" of growing medical cannabis on the outskirts of the city, a decision it described as “pioneering”.
News
3 years ago
Next Article