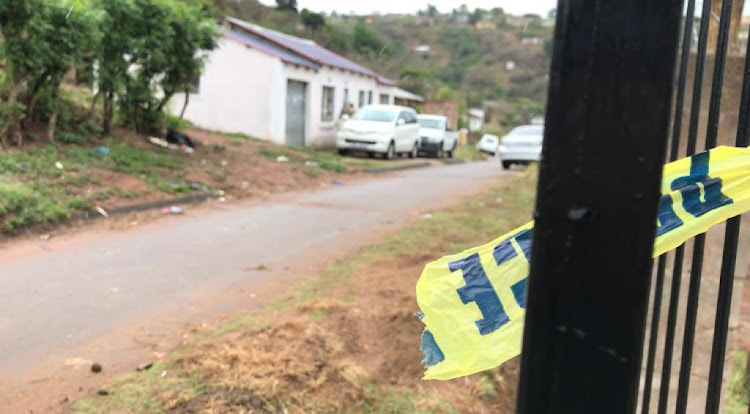 A portion of police tape remains attached to a gate on an unnamed street in KwaNdengezi, where six people were shot execution-style on Saturday night. Five of them died instantly.
Image: Orrin Singh

Police minister Bheki Cele has labelled the ruthless murder of nine people in KwaNdengezi, west of Durban, as bizarre as police are yet to establish a motive for the execution-style killings.

Addressing the media after meeting residents and the family of the victims at the KwaNdengezi community hall on Monday, Cele said police and senior Hawks detectives were working hard to track down the gunmen.

Cele, along with national commissioner Gen Khehla Sitole and MEC for transport, community safety and liaison Bheki Ntuli, visited the area after the murder of nine people on Saturday in two separate incidents, which occurred within a space of eight hours.

Police minister Bheki Cele, commissioner Gen Khehla Sithole and MEC for transport, community safety and liason Bheki Ntuli arrive at the KwaNdengezi community hall to address residents on the #KwaNdengeziMassacre where 5 people were shot and killed on Saturday ⁦@TimesLIVE⁩ pic.twitter.com/8BaQWcuWun

“To lose nine people, massacred and murdered — in a question of about eight to 10 hours, in one place — that's quite serious. Hence we have brought this delegation so the commissioner himself can take decisions that need to be taken on the ground,” he said.

Cele said the matter was quite “raw” and “bizarre” as no motive had been established for the killings.

He said the first incident related to four bodies found at a school sports ground in the area on Saturday morning.

He said police believed the incident was a result of someone taking justice into their own hands as the victims, all male and aged between 17 and 40, were said to have been stock thieves.

“The information we have is that they are accused of having committed some sort of a crime. They talk about stock theft. It looks like those people were put in one place and executed.”

He said the second incident, in which six people were forced out of a vehicle and made to lay face down on the ground before being shot, was bizarre.

Cele dismissed rumours that the six victims, one of whom survived and is in a critical condition in hospital, had been coming home from a party.

9 people were shot and killed execution style in two separate incidents in KwaNdengezi on Saturday. Bheki Cele explains the second incident which claimed the lives of 5 people, with one fighting for her life in hospital. Two of the victims are teachers ⁦@TimesLIVE⁩ pic.twitter.com/MPJ8EfmL9B

“Those people were not coming from a party and it is not a question of alcohol and other stuff. They were driving — six in a car ... They were ordered to get out of the car ... ... ordered to [lie] on their stomachs, shot them. No argument, no scuffle, nothing — just that kind of criminality.”

The police said earlier that the six victims had been seated in an SUV when three men pulled up in a VW Polo and ordered them out of their vehicle and opened fire.

The incident occurred on an unnamed road, which leads to a cul-de-sac.

A man who lives on the road and spoke on condition of anonymity said he arrived home on Saturday night to find police and ambulances everywhere.

WATCH| A resident of KwaNdengezi, west of Durban, describes the gruesome scene where five people were shot and killed execution-style on Saturday evening. @TimesLIVE understands that the victims had been visiting someone after returning from a night out when the incident occurred pic.twitter.com/jDvuHb3qSv

“I just stopped my car and went to check on my children because I didn't know what exactly had happened. After I checked that my children were fine, I saw the community and asked them what had happened and they told me that there was a shooting. I saw the bodies. One of them was my neighbour and the others were visiting my neighbour — that's what I heard.”

He described the victims as “quiet people” who lived in and near the area. “It's scary — we are unable to sleep at night. We're even talking of moving out of the area because of the trauma,” he said.

Two of the victims — one of whom is the sole survivor and is fighting for her life in hospital — are understood to be primary schoolteachers from the Pinetown district.

Provincial education spokesperson Muzi Mahlambi said they had received confirmation from the district that two of the victims were teachers.

Police minister Bheki Cele will on Monday visit the family of five people who were shot dead in an apparent hit outside Durban on Saturday night.
News
1 year ago

Elizabeth Maubane says her police officer brother has been completely overlooked when people talk about the Marikana massacre.
News
1 year ago
Next Article