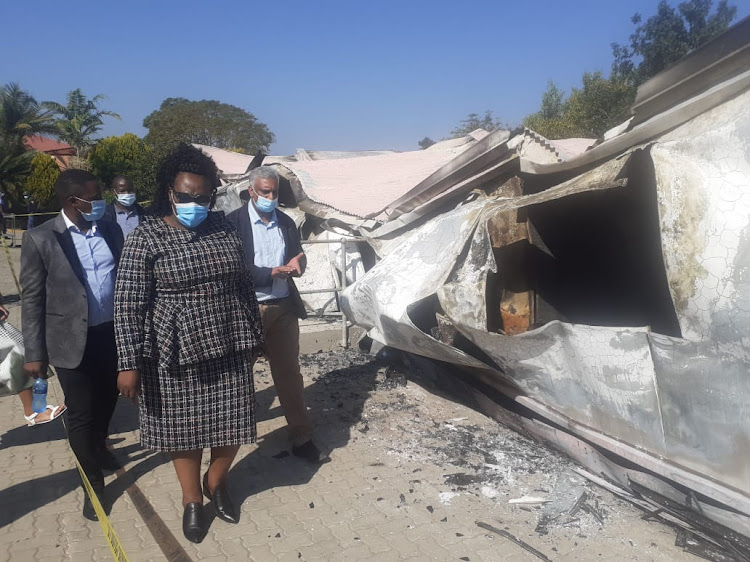 KZN health MEC Nomagugu Simelane-Zulu inspects a hospital that was razed allegedly by members of the community who were not happy that it would treat Covid-19 patients.
Image: KZN department of health

A security guard has been injured and a R6m hospital building in northern KwaZulu-Natal burnt to the ground, allegedly to protest the hospital being used as a Covid-19 facility.

In a statement on Thursday, the KZN department of health said it was shocked at the torching of a new centre at the Catherine Booth Hospital, at Amatikulu, near Eshowe, in the early hours of Thursday.

“It is believed that the torching of this brand-new centre — which was also burnt down three years ago — is linked to disquiet among sections of the community over the conversion of a section of the hospital into a Covid-19 treatment facility,” said the department.

The centre, which was used as an admin block, had recently been rebuilt after it was torched in 2017.

“The incident, which also saw shots being fired, took place between midnight and 1am, and left a security guard with a facial injury,” said the department.

Health MEC Nomagugu Simelane-Zulu said that she was considering closing the hospital which has 127 beds and 39 patients. Three of them are in isolation and receiving treatment for Covid-19, while two are in quarantine, awaiting their results.

“We are in a crisis. This is a pandemic that all of us are faced with. And the department has a responsibility to ensure that it provides all the beds that are needed, so that those who are Covid-19 positive get the assistance they need,” said Simelane-Zulu.

A R6 million hospital building at Catherine Booth Hospital, in northern KZN, was torched this morning allegedly in protest of it being used as a Covid-19 hospital. MEC for health Nomagugu Simelane-Zulu visited the hospital today @TimesLIVE @yasantha
(Vid supplied) pic.twitter.com/ncuCuEvfyc

“We’re going to continue using this hospital for Covid as and when it is necessary for us to do so. So if the community does not allow us to do that, it means they do not need this hospital.

“We might then need to go back to the premier and request that this facility be closed down, because we’re not going to have a facility that will be a white elephant and not be utilised.”

Simelane-Zulu said that her department viewed this as a sign of anarchy.

“Right now, the department, province and country need beds for Covid. So when we are stopped from utilising a facility to save people’s lives ... that is something we’re not going to tolerate. That is anarchy, and we will not stand aside and watch,” she said.

“A group of unknown people attacked the hospital in Eshowe and set alight a park home which comprises eight offices. All the equipment in the offices was burnt. The circumstances are being investigated,” said Gwala.