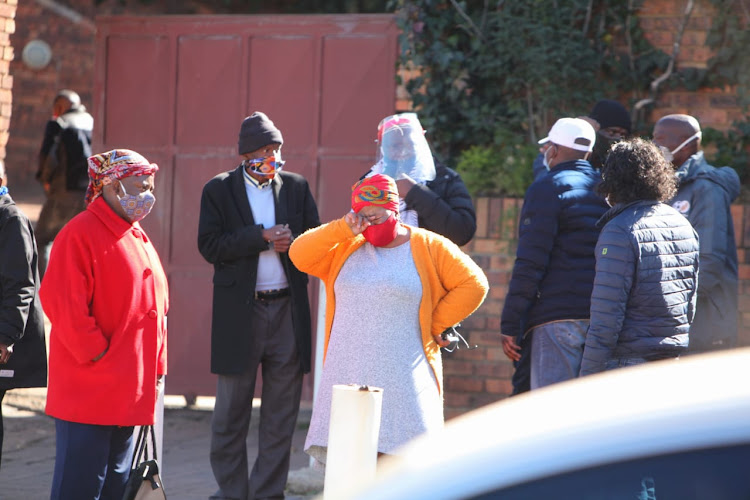 Family and friends outside the Orlando home of Winnie Madikizela-Mandela in Soweto after Zindzi Mandela passed away on Monday morning.
Image: Alaister Russell

A small group of friends and family arrived at Winnie Madikizela-Mandela's Soweto home just before 2pm on Monday to pay their respects to her daughter Zindziswa Mandela.

The South African ambassador to Denmark was allegedly rushed to hospital on Sunday and died on Monday morning at the age of 59. The cause of her death has not been revealed.

Visitors to the home, in Maseli Street in Orlando West, waited outside on some chairs laid out on the verge, which had long since become an extra parking lot for the flow of vehicles arriving for important events.

The home is near Mandela House, where Madikizela-Mandela and Nelson Mandela lived from 1946 to 1962.

At least four guards waited at the entrance to the home, preventing any cars from entering the premises. Visitors had to park among the gathering media and wait at the entrance. A guard said nobody could enter the house until it had been disinfected.

A few minutes before 2pm, the visitors were permitted onto the premises. A group of ANC cadres remained behind, speaking among themselves in the winter sun. In the background, on a koppie of granite, people began to gather to watch the unfolding events.

After 2pm a vehicle belonging to a cleaning company exited the back of the house.

None of the visitors to the home nor the guards would speak to the media and questions to passers-by went unanswered.

At around 4pm, the visitors left.

Active on Twitter, Zindzi's last tweet was on March 26. She had been complaining about her bank card being swallowed by an ATM. She wrote that she was feeling unwell and had to send a custodian to the bank. Since then her profile has been silent.

I am not feeling well thus have sent a custodian not only with my id but with his as well. Have also had two telephone conversations with someone @Nedbank and they are still not satisfied. https://t.co/2zRcoTqTVb

July 13 was already a painful day for the family, who had lost Nelson Mandela's oldest son  Thembekile on the day in 1969.

Thembekile was 24 years old when he died in a car accident in Cape Town. Madiba was imprisoned on Robben Island at the time and was denied permission to attend the funeral.

Bishop Gary Rivas from the Methodist Church of Southern Africa said he had known the Mandela family for more than 15 years. He visited the family at their Orlando home on Monday morning.

“The family is really struggling with coming to terms with Zindzi’s death. The children are taking it hard and the family still has a lot of questions,” he said.