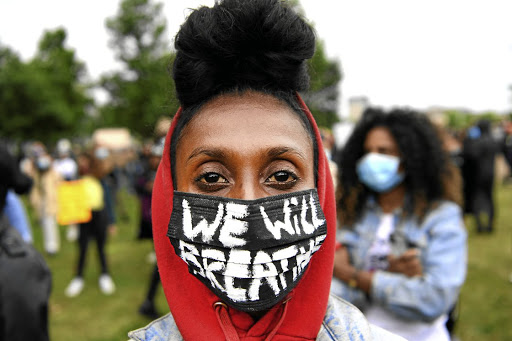 A demonstrator attends a Black Lives Matter protest in Amsterdam, the Netherlands, on Wednesday, in the aftermath of the death of George Floyd at police hands. /PIROSCHKA VAN DE WOUW/REUTERS

The contrasting reactions to the murders of George Floyd and Collins Khosa at the hands of the police and soldiers call for a deeper scrutiny of racism.

Minneapolis resident Floyd, a 46-year-old black man, died on May 25 after a white police officer, Derek Chauvin, knelt on his neck for almost nine minutes. His sin was having allegedly purchased cigarettes with a fake $20 bill.

Floyd had pleaded for his life, exclaiming several times that he could not breathe. His pleas fell on deaf ears as Chauvin, with his three fellow officers failing to restrain him, slowly snuffed the life out of him.

Floyd's brutal killing triggered demonstrations in more than 75 US cities against police brutality, police racism and lack of police accountability.

This cynical act of police brutality drew collective outrage from Americans across racial boundaries. Swift action followed with the arrest of Chauvin and his three fellow officers. Widespread condemnation of their actions followed.

Condemnation was not confined to the US, with foreign countries also expressing their concern with the turn of events. Protest actions were organised in many foreign countries to pledge solidarity with the American people. Religious leaders also joined this chorus of condemnation.

George Floyd hailed as 'cornerstone of a movement' at funeral; family calls for justice

George Floyd was memorialized at his funeral on Tuesday as "an ordinary brother" transformed by fate into the "cornerstone of a movement."
News
2 years ago

On the home front, the ANC called for calm in the US, urging President Cyril Ramaphosa to "engage with the US government" through diplomatic channels to "diffuse racial tensions and build social cohesion among the different races".

This is rich coming from the ANC in light of the murder of Khosa by members of the South African National Defence Force (SANDF) and the Johannesburg Metro Police Department (JMPD) during the nationwide lockdown.

The 40-year-old Alexandra resident died on April 10 following a brutal beating at the hands of members of the SANDF and JMPD. This was after he was accused of having had a half-full glass of beer in his yard which, according to the soldiers, was in violation of lockdown regulations.

According to a witness affidavit, four officers assaulted Khosa by pouring beer on his head, choking him, banging his head against a cement wall, hitting him with the butt of a machine gun, kicking, slapping and punching him in the face, stomach and ribs and finally slamming him against the steel gate.

Almost two months after Khosa's death the SANDF board found that the soldiers accused of killing Khosa could not be held liable for his death. The report was basically a whitewash.

Contrasted to the reactions to Floyd's murder, Khosa's death elicited a muted response, with Khosa's family almost left to their own devices in their quest for justice. Defence minister Nosiviwe Mapisa-Nqakula only managed to mumble an apology, stating that "we hang our heads in shame".

Neighbours of the Khosa family said they had seen soldiers assaulting Collins Khosa and his brother-in-law at their Alexandra home as new details of ...
News
2 years ago

We have not seen any demonstrations and protests, and no statements of blanket condemnation from political parties. It seems SA is ready to move on, just as we did after the murders of Andries Tatane, Mido Macia and the Marikana protesters among some of the victims of police brutality.

SA's deafening silence in the face of the brutal murder of Khosa will be permanently etched in the memories of his family.

The pertinent question in this regard is why have we seen such lackadaisical reaction to Khosa's murder compared to Floyd's? The answer to this question is that racism is generally framed to reflect on the ill-treatment of blacks by whites. Had Khosa's murder been perpetrated by white officers, we would have witnessed a far different reaction in SA. Khosa's life would have mattered and he would not have been dismissed as a victim of police "over-enthusiasm".

The lesson to be learnt from the Floyd/Khosa episode is that the scale of our outrage for violations of man by man should not be determined by the race of the perpetrator or the victim. In the meantime, it is not too late to start demanding justice on behalf of Khosa's family.

Lee is a Sowetan reader and a regular letter writer

The EFF will be suing the state on behalf of the family of Collins Khosa, the party's leader Julius Malema revealed on Monday.
News
2 years ago

“Anyone who instructed the killing of people in Marikana has no leg to stand on, they cannot claim that black lives matter.
News
2 years ago

Minister Mapisa-Nqakula out of touch with reality

Whether incompetent or misled, the manner in which the defence minister Nosiviwe Mapisa-Nqakula has so far handled the investigation into the killing ...
Opinion
2 years ago
Next Article