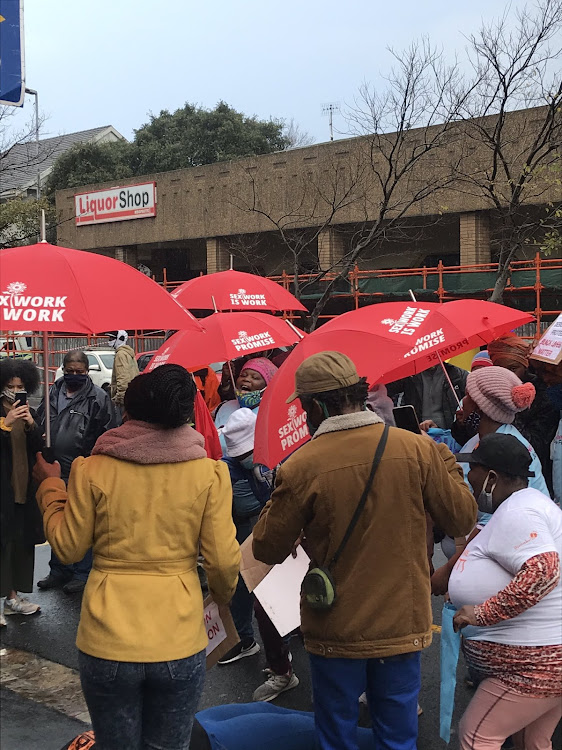 A group of Mowbray residents and members of civil rights organisations gathered outside the Mowbray police station in Cape Town calling for justice for Robyn Montsumi, a sex worker who allegedly died in police custody.
Image: Sweat via Twitter

Mowbray residents and members of civil rights organisations took to the streets on Friday, calling for justice for Robyn Montsumi, a sex worker who allegedly died in police custody in Cape Town.

Lindokuhle Patiwe, BPNCC convener, on Friday said that about 40 members of civil rights groups and residents marched to the police station to deliver a memorandum.

The group, he said, had called on the police to account for her death.

Patiwe questioned whether she had hung herself in custody.

“Even though she was a sex worker and a homeless person, Robyn deserved to live,” said Patiwe.

“We want justice for Robyn ... Sex workers who are homeless are also human beings. We want to know what happened to Robyn,” Dlamini said.

The Asijiki Coalition and Sonke Gender Justice distanced themselves from the march on Friday but said in a statement that they fully supported the call for an investigation into the death of Montsumi.

“The coronavirus has been bad for business. I never wanted to be a prostitute [and] I have thought of killing myself on numerous occasions, but I ...
News
2 years ago

Their work involves lots of touching, and social distancing isn't possible. During the time of Covid-19, business is down for sex workers and ...
News
2 years ago

The Johannesburg magistrate's court has sentenced a 63-year-old man to an effective 12-years in prison on charges of sexually assaulting a minor.
News
2 years ago
Next Article