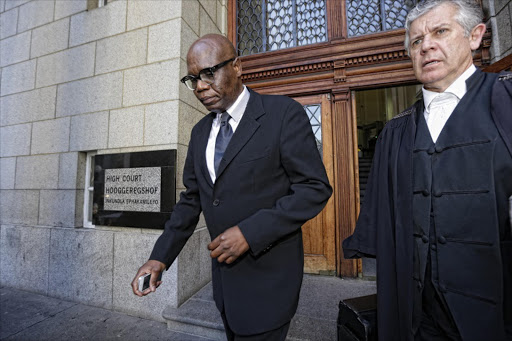 Artist Zwelethu Mthethwa was sentenced to 18 years in prison by the Western Cape High Court on Wednesday for murdering sex worker Nokuphila Kumalo in 2013.

The Sex Worker Education and Advocacy Taskforce (SWEAT) and the Sisonke National Movement of Sex Workers in South Africa welcomed the sentencing‚ saying: “A sentence of 18 years was handed down. We applaud the court seeing fit to exceed the minimum sentence of 15 years.”

Kumalo was “just the girl next door who wanted to provide for her family‚” said Gulam Petersen‚ a transgender sex worker and a friend‚ earlier this year.

The artist and and photographer beat Kumalo‚ 23‚ to death in Woodstock in 2013.

She died of cardiac arrest after suffering a liver injury from blunt force trauma.

The incident was captured on CCTV and Mthethwa’s Porsche was identified at the scene.

“As Sisonke Movement we appreciate the message sent by Judge Goliath. This is a giant step taken by the judge‚ which acknowledges that a human being died that night‚ never mind what profession she chose to be in or how low society treats not only sex workers but women as a whole in South Africa‚” said Kholiswa Tyiki‚ Sisonke’s communication and membership officer.

“We are all aware of how the criminal justice fails women on a daily basis and that justice can no longer be found at our courts. However‚ we are mindful that the conviction and sentencing of Mthethwa is a victory for Nokuphila’s family and friends and we hope that this marks a shift in our courts taking the lives of sex workers more seriously‚” said Ishtar Lakhani‚ advocacy and human rights defence manager at SWEAT.