Inside SA's plan to bring citizens home from coronavirus epicentre 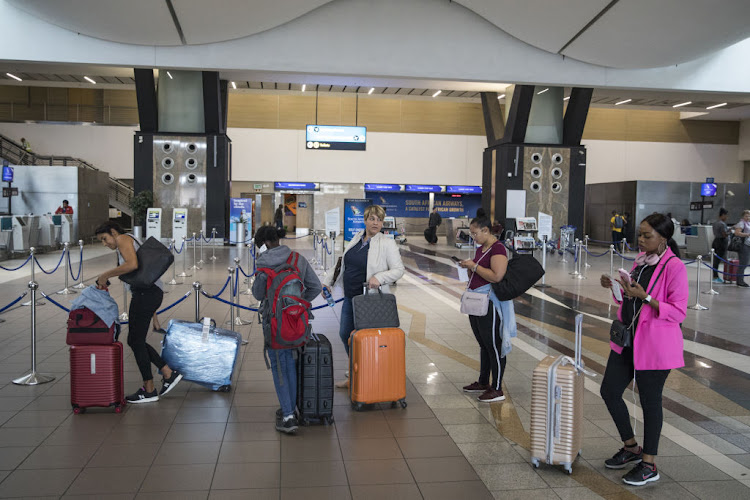 Passengers queue at the check-in desks inside the departures hall at O.R. Tambo International Airport. SA is to send a plane to Wuhan, China, within days to bring back an estimated 134 citizens from the city where the virus was first detected.
Image: Guillem Sartorio/Bloomberg via Getty Images

A full-scale military rescue mission is under way to evacuate more than 130 South Africans trapped in China's Wuhan city, as the epidemic tightens its grip on a nervous world uncertain what to expect next.

Once they are safely back in the country, the South African evacuees will be quarantined at a secret resort in the Free State where they - along with the flight crew and resort staff - will be kept under heavy guard for 21 days.

A chartered plane - "preferably from SAA" - is due to leave tomorrow or on Tuesday and return later in the week.

None of those involved have shown any sign of having contracted the virus, which by late yesterday had spread to 57 countries, claiming the lives of 2,933 people, with 85,700 having been infected and under treatment.

SA has yet to have a confirmed case of the new coronavirus.

The decision to offer voluntary evacuation to South Africans is an abrupt reversal of an earlier decision to keep them there, even though other countries have been pulling out their nationals from China.

An inter-ministerial media conference was held on March 01 2020 near OR Tambo International airport amid growing concerns around the spread of the coronavirus in Africa. Minister of health Zweli Mkhize led the panel discussion which confirmed that a repatriation mission to bring South Africans home will begin within the next 7 to 10 days.

This week, facing protests from families of loved ones trapped in China, the epicentre of the virus, the government changed tack and decided those who had not tested positive would be brought home.

The virus has sent global markets into free fall, hitting their worst lows since the financial crash of 2008 and triggering fears of a global economic recession as more countries are affected.

The Sunday Times has been given rare access to information on the evacuation, which will include government health officials, among them communicable disease experts, working to bring back at least 134 citizens.

Alongside pressure from families to bring home their loved ones, a well-placed source with knowledge of the evacuation plan said the decision was based on growing safety concerns for those in the lockdown zone.

"Information gathered on the spread of the disease, the true extent of those infected and their treatment, is alarming. The information warranted an urgent evacuation," the source said.

Information gathered on the spread of the disease, the true extent of those infected and their treatment, is alarming. The information warranted an urgent evacuation

Roughly 200 South Africans live, work and study in Wuhan. The majority of those returning are students.

The 10 South Africans trapped in Japan on board the Diamond Princess cruise ship will not yet be evacuated. An additional two South Africans on board have tested positive for the virus and have been quarantined.

The Sunday Times has been told the evacuation team consists of communicable disease experts and government and military health services officers, including specialised staff from 7 Medical Battalion. The battalion's members are trained in bio-chemical warfare.

Defence ministry spokesperson Siphiwe Dlamini said the flight would be chartered, "preferably from SAA". He said China had given the plane only eight hours on the ground.

"Those returning will be collected from a special holding facility at the airport and flown back to SA.

"Once they have landed they will be transported by bus to a resort in the Free State identified as the quarantine facility."

The source said the aircraft would land at Bloemspruit air force base in Bloemfontein.

Dlamini said World Health Organisation (WHO) protocols dictated a quarantine period of 14 days, "but because this is a military option we are quarantining people for 21 days".

"The quarantine is necessary to ensure, that in the unlikelihood of anyone showing signs of infection, they can be expeditiously treated at specifically identified hospitals. Everyone in contact with those coming home will be quarantined, including aircrew, military personnel and the bus drivers."

Stigma around coronavirus may lead some to hide illness, warns institute

The National Institute for Communicable Diseases (NICD) says it has tested a total of 160 persons for Coronavirus, 109 of which have been placed ...
News
1 year ago

He said the resort and its surrounding areas are a designated military zone and will be in total lockdown.

"The facility will be under heavy guard from both the military and the police."

Health ministry spokesperson Lwazi Manzi said: "The quarantine area is a national key point. We appeal to people to not try to sneak into the facility to be with their families. Anyone who does will be detained and quarantined."

Meanwhile, the steep drop in world markets has led to the combined fortunes of the world's 500 richest people falling by $444bn (R6.9-trillion), according to the Bloomberg billionaires index. The world's three richest people - Amazon.com's Jeff Bezos, Microsoft co-founder Bill Gates and LVMH chair Bernard Arnault - incurred the biggest losses, with their combined wealth dropping about $30bn.

Stock markets are expected to fall further tomorrow after a record contraction in China's manufacturing and service sectors.

Gates on Friday urged wealthy nations to help low- and middle-income countries strengthen their health systems in hopes of slowing the spread of the coronavirus, which he said had started to behave like a "once-in-a-century" pathogen.

"By helping countries in Africa and South Asia get ready now, we can save lives and also slow the global circulation of this virus," Gates wrote in an editorial in the New England Journal of Medicine.

Gates's plea was echoed by the WHO, which said the risk is very high that the virus will have a global impact.

The WHO implored governments to swing into action to contain the virus before it becomes widespread.

In the US, public health officials said they have identified four "presumptive" coronavirus cases - two in California, one in Oregon and another in Washington state - believed to have emerged from community transmission of the infection.

Coronavirus airlift doesn't appeal to all.
News
1 year ago

All four people diagnosed had no history of travel to a country where the virus is circulating and no close contact with an infected person.

The numbers of deaths and new infections appear to be dropping in China, but they are picking up in other countries.

Iran, which has the highest death toll outside China, has had 34 fatalities and 388 infections. South Korea yesterday urged citizens to stay indoors as it warned of a "critical moment" in its battle against the coronavirus after recording the biggest daily jump in infections, as 813 new cases took the tally to 3,150, with 17 dead.

Nigeria, Mexico and New Zealand were among countries reporting their first infections. There were more cases in Australia and Thailand, and in France confirmed cases jumped by 19 to 57.

Professional sport has taken a hit. In Italy, where 21 people have died and 889 been diagnosed, soccer clubs Juventus and Inter Milan will play behind closed doors today.

There have been doubts about the Olympics in Japan this year, though the International Olympic Committee said it "is fully committed to a successful Olympic Games in Tokyo starting on July 24".

Japanese Prime Minister Shinzo Abe requested the nearly month-long closure of schools to curb the spread of the virus.

Amazon has reportedly removed more than 1-million products from its digital store that are fraudulently branded as coronavirus cures or safeguards.