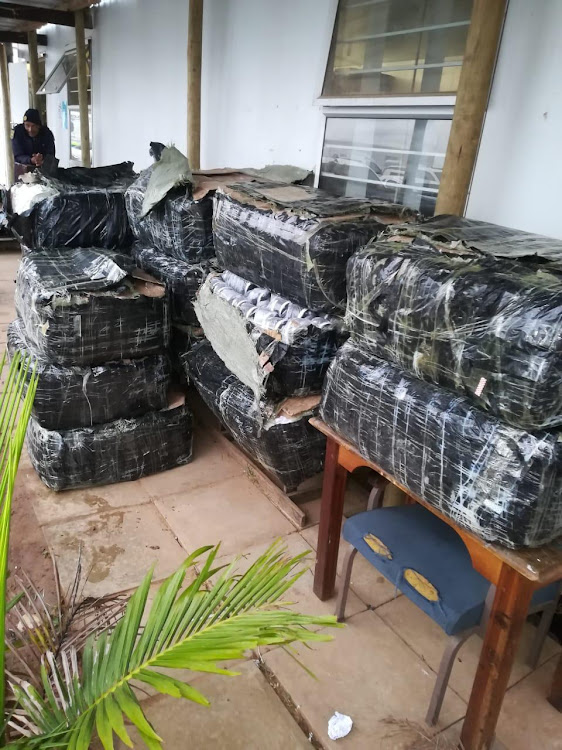 KZN police found a woman in possession of 15 boxes containing 60 packages of cigarettes and 900 pairs of sneakers.
Image: Supplied

A KwaZulu-Natal woman has been arrested for being in possession of illicit goods with an estimated value of R1.2m.

Police said on Monday that the 28-year-old woman was arrested in Emanguzi, in northern KZN, on January 20. She was travelling on the R22 which runs towards the Mozambique border, when police flagged her and the driver of the vehicle down.

“The driver spotted the police and abandoned the vehicle as he fled into nearby bushes. The female suspect was found in the vehicle with 15 boxes, which contained 60 units of cigarettes and 900 pairs of branded sneakers," said SAPS spokesperson Brig Jay Naicker.

"She was questioned with regards to the goods. However, she failed to provide police with a reasonable explanation for being in possession of the illicit and counterfeit goods."

The woman was arrested and charged and the vehicle was impounded. She appeared in the Emanguzi magistrate's court on January 21.

Counterfeit clothing worth about R5m was seized in the Durban CBD during multiple police operations on Friday.
News
2 years ago

In a separate incident on the same road, police arrested a 36-year-old man in possession of suspected stolen property on Friday.

“The suspect was traveling along the R22 when he was stopped by police,” said Naicker.

"During a search of the vehicle, police found two bags containing electrical appliances. The suspect could not provide police with any proof of ownership for the items."

The man appeared in the Kwangwanase magistrate's court on Monday.

IN PICTURES | R67m worth of counterfeit goods recovered in KZN bust

An estimated R67m worth of counterfeit goods have been recovered at a business premises in Westmead, Durban.
News
2 years ago

Gauteng police on Friday said they had raided premises that were operating as a factory to produce “fake” spices.
News
2 years ago
Next Article