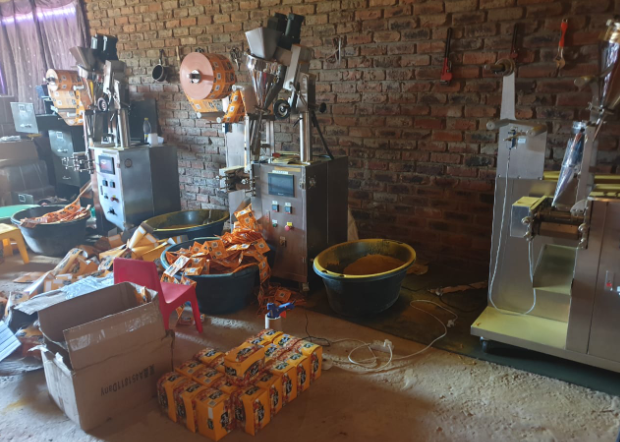 A factory believed to be producing fake spices was raided in Sedibeng.
Image: Supplied / SAPS

Gauteng police on Friday said they had raided premises that were operating as a factory to produce “fake” spices.

The premises are in Sedibeng.

“On arrival at the plot, police took in 10 foreign nationals who were immediately handed over to immigration officers from the department of home affairs for verification of their status in the country. Eight were from Mozambique, while two were Chinese,” said Brig Mathapelo Peters.

Counterfeit spices believed to be worth millions were confiscated.

“On the property, police also confiscated bags of different types of powder used to produce the illicit spices, as well as equipment and machinery suspected of being utilised for processing and packaging,” said Peters.

“Operations of this nature, over and above Operation O Kae Molao, will continue and will be intensified as police gear up to turn the tide against crime. With these, police will also be conducting more operations to ensure that the residents and visitors of Gauteng enjoy a safer festive season,” said provincial commissioner Lt-Gen Elias Mawela.

Police reinforcements were called to De Doorns on Thursday, as looters ran amok on the N1 highway, stealing big-screen television sets from ...
News
2 years ago
Next Article