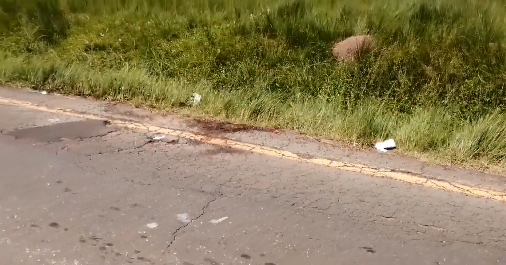 A KwaZulu-Natal ward councillor described the gruesome scene he witnessed moments after a taxi shooting in which a 10-month-old baby‚ a schoolgirl and the driver were brutally killed in Cato Ridge near Pietermaritzburg on Wednesday.

Councillor Bongumusa Mkhize of KwaXimba was travelling home along Eddie Hagen Drive in Inchanga when some children attempted to flag him down.

Mkhize said he could see a taxi parked on the MR423 road and bodies strewn across the grass and road.

“It was around 7.50pm and at the corner I came across the taxi parked with people lying down all over. Some kids stopped me and I immediately called metro police and ambulances to the scene.”

A police source said that a silver vehicle had followed the taxi before a passenger opened fire on the minibus.

On Thursday morning police and metro officers visited the scene.

When TimesLIVE arrived‚ small pools of blood and shattered glass lined a portion of the road where the taxi had come to an abrupt halt.

[WATCH] Blood and shattered glass stain the sun-baked MR423 Road near Cato Ridge in KZN where a taxi was sprayed with bullets, killing a 10-month-old baby, a school girl - still in her uniform - and the driver of the vehicle. #TaxiViolence @TimesLIVE pic.twitter.com/JzCuhEWVt0

“It is alleged that last night at 7.30pm a 37-year-old taxi driver was driving along Eddie Hagen Drive in Inchanga when a person in a silver vehicle opened fire towards the taxi‚ fatally wounding the driver and two passengers‚ and injuring four passengers.”

She said the injured passengers aged between four months and 40 years were taken to hospital for medical attention.

While police said the motive for the shooting was unknown‚ sources close to the investigation have indicated that it relates to conflicts within the Swayimane Taxi Association regarding certain routes.

Former KZN MEC for transport‚ community safety and liaison Mxolisi Kaunda had visited the area after a previous shooting in which two passengers and a taxi driver were shot dead.

In a separate incident on Thursday‚ a 61-year-old motorist was shot dead in Isipingo‚ south of Durban.

“It is alleged that this morning at 11am a 61-year-old man was driving along Watson and Police Station road when he was attacked by unknown people who opened fire in his direction.

“He lost control of his vehicle and crashed into a wall. He sustained multiple gunshot wounds to the body and was certified dead at the scene. It is reported that the suspects fled the scene in their getaway white A3 Audi vehicle.”

Mbele could not confirm whether the incident was related to taxi violence.

“A murder case was opened at Isipingo police station for investigation‚” she said.