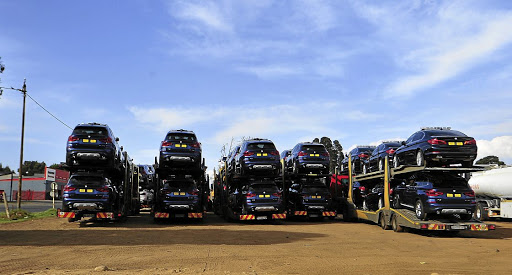 A cargo of BMW sedans and SUVs which were photographed at Carolina, Mpumalanga, en route to Eswatini.
Image: Veli Nhlapo

The Eswatini ministry of public works and transport has confirmed receiving a fleet of new BMWs.

The media statement by Ndlaluhlaza Ndwandwe, the minister of public works and transport was issued on Friday after Sowetan broke the story of 79 BMW X3 SUVs and BMW 540 cars which were delivered to the kingdom from the German carmaker's Rosslyn, Pretoria, plant on Thursday evening.

The delivery follows that of 15 Rolls Royces which were shipped into SA through the Durban port and delivered to the King Mswati III's Manzini royal palace a week ago.

Twelve trucks loaded with the latest model BMW X3 SUVs and BMW 540 sedans, mostly navy blue in colour and some white, waited for hours in Carolina, about 100km from the Oshoek Swazi border post.

They were only escorted by Eswatini security personnel from Carolina into the kingdom, bypassing all border gate processes and protocols, after dusk.

Ndwandwe in a statement said the department was "taking this opportunity to inform the public that it has taken delivery of a fleet of cars and motorcycles for escort duties".

"The process to replace the existing fleet started in 2016, consistent with the prevailing government policy of replacing Government vehicles after five years," Ndwandwe said.