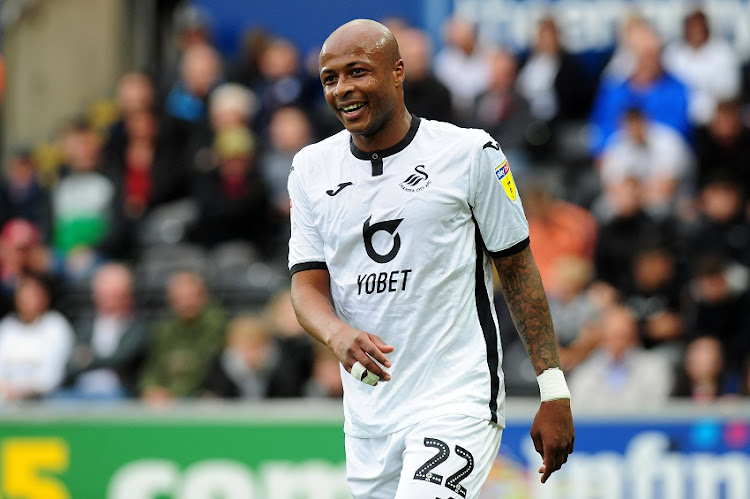 Andre Ayew of Swansea City during the Sky Bet Championship match between Swansea City and Reading at the Liberty Stadium on September 28, 2019 in Swansea, Wales.
Image: Athena Pictures/Getty Images

Ghana captain Andre Ayew says his side must put their bodies on the line to beat South Africa in their 2021 Africa Cup of Nations qualifier in Cape Coast on Thursday‚ even if it means “we have to die”.

It is a rousing message from the Swansea City star‚ who along with brother Jordan will be the key dangermen for Bafana Bafana in the opening game of their qualification campaign.

Ghana are certainly not the force of old and after a second round exit at the recent Africa Cup of Nations finals in Egypt‚ there has been much negativity surrounding the Black Stars.

Ayew believes they have a tough qualification pool for the next finals‚ but has urged his players to give their all.

“South Africa‚ we have met them a lot of times. Right now every team has its qualities so we have to block their qualities and use ours because at the end of the day we have great players‚” Ayew told reporters after the team training session on Monday.

“Football is a game of a win‚ draw or lose‚ but we have to give everything. We have to die. We have to run. We have to play and make sure that at the end of the day we can go home and look at ourselves and say we gave everything we had for the nation.

“It is not going to be easy. I can tell you that this qualification is going to be very difficult‚ but we will go through.”

Ghana have qualified for 14 of the last 15 Cup of Nations finals‚ missing out only at Tunisia 2004‚ and remarkably made the semifinals at least in each of the six tournaments that preceded the 2019 edition without ever lifting the trophy.

They only had 13 players at their first training session on Monday as their array of Europe-based stars trickle into camp‚ meaning they will likely have two full sessions before the game against Bafana.