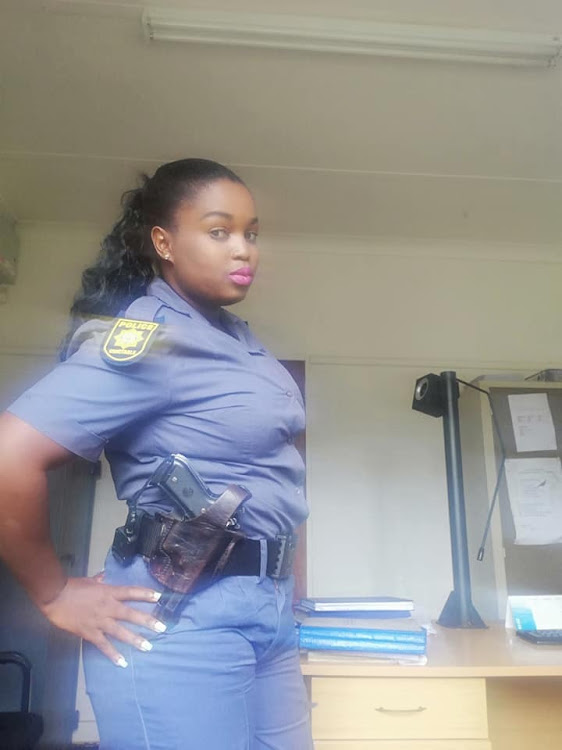 Constable Nangamso Jayiya, 30, is charged with the murder of her boyfriend Anele Veli, 33.
Image: FACEBOOK

An Eastern Cape policewoman has been arrested and charged with murder after shooting dead her boyfriend of five months on Thursday evening.

Constable Nangamso Jayiya, 30, based at  NU1 police station in Mdantsane, on Sunday confirmed to DispatchLIVE that she had killed her “jealous” boyfriend Anele Veli, 33, claiming she did so in self-defence after he assaulted her.

In a shocking twist, two of Veli’s sisters, aged 33 and 27, have been arrested for arson after Jayiya’s NU8 home, where the shooting took place, was allegedly petrol-bombed hours after her arrest.

Jayiya said she had pleaded not guilty to murder in court, and told the magistrate she would plead self-defence because he had attacked her.

“I don’t owe people any explanation.

“They can think whatever they like about me, but all I am saying is that my life was in danger,” she said.

She would not say how she was assaulted, adding she was not willing to comment further on the matter as it was now before court.

The deadly incident followed what has been described by police sources as “a jealousy-fuelled argument”.

Mdantsane police spokesperson Captain Nkosikho Mzuku said the two sisters would appear in the Mdantsane magistrate’s court on Monday, where they would face arson charges.

I don’t owe people any explanation. All I am saying is that my life was in danger

During a Dispatch visit to the bereaved family, Veli’s older brother Thando said they had suffered a “double blow” as the arrest of his siblings had come while they were all battling to come to terms with Veli’s death. “They came here with a questionable eyewitness who claimed to have seen my sisters torching the house at 2am.

“But how can you positively identify someone at that hour?”

Independent Police Investigative Directorate (Ipid) acting spokesperson Sontaga Seisa on Sunday confirmed that the shooting had been reported to them and said Veli died after a single shot to the hip.

“Ipid confirms it received an incident report of the death as a result of police action.

“It is alleged that an off-duty 30-year-old police official was arrested after her boyfriend was shot once and died in Mdantsane.

“It is too early to establish the rest of the circumstances of the incident,” she added.

Seisa said Jayiya was off duty when the shooting took place.

Jayiya was arrested immediately after the incident and had appeared in the Mdantsane magistrate’s court on Friday before being released on a warning, Seisa confirmed.

“The available evidence is not enough.

“More time is needed to trace witnesses and also to obtain other technical reports that are not yet ready,” she added.

DispatchLIVE visited Jayiya’s home on Sunday morning and found it in ruins with charred walls and a burnt-out roof.

Neighbours said that Jayiya was there earlier to salvage what was left after the fire.

Her burnt-out house is a few houses away from her dead boyfriend’s home.

Thando said the police had arrested his sisters “based on a rumour”.

The release of Jayiya and arrest of his sisters had left the entire family in shock, he added. He described his slain brother as “a gentleman who kept to himself and was loved by the community at large”.

He said Veli worked at a local car rental dealer and had two daughters.