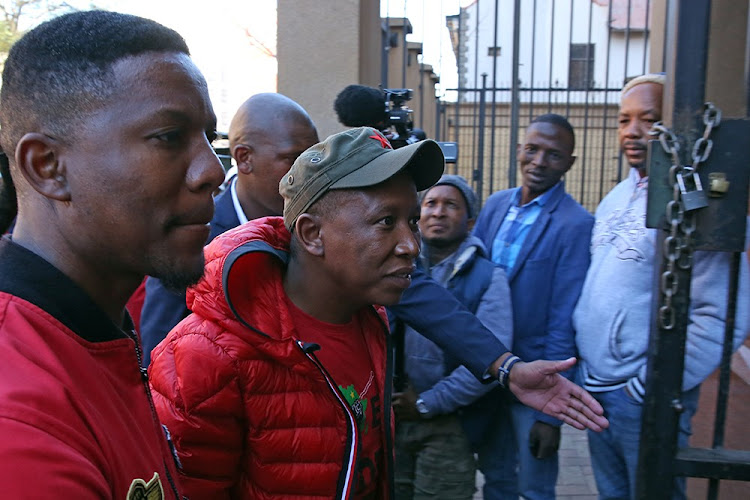 Julias Malama arrives at the high court in Pretoria where the case of the Public Protector and the Minister of public enterprises Pravin Gordhan has commenced
Image: Thapelo Morebudi

The remedial orders in a report by public protector Busisiwe Mkhwebane on the SA Revenue Service (Sars) "rogue unit" should not be immediately implemented as they had far-reaching consequences.

This was one of the submissions made by Wim Trengove SC‚ counsel for public enterprises minister Pravin Gordhan‚ at the high court in Pretoria on Tuesday.

Gordhan is asking the court‚ on an urgent basis‚ to suspend and interdict the enforcement of the remedial orders by the public protector‚ pending the final determination of a review application to be determined at a later date.

In her report on an investigation into the establishment of the "rogue unit"‚ Busisiwe Mkhwebane found that the setting up of the unit‚ approved by Gordhan when he was minister of finance‚ was in violation of the constitution.

In her remedial action‚ Mkhwebane gave President Cyril Ramaphosa 30 days to take disciplinary or remedial action against Gordhan for his role in the establishment of the unit.

She also gave National Assembly speaker Thandi Modise 14 days after receiving her report to refer Gordhan to parliament's ethics committee to be investigated for breaching the code of ethical conduct.

Madiba Street in front of the North Gauteng High Court in the Pretoria CBD has been temporarily closed for traffic due to dozens of protesters singing and chanting in front of the court. The two groups are protesting in support of public protector Busisiwe Mkhwebane as the court is hearing an urgent application by public enterprises minister Pravin Gordhan, who's challenging the implementation of Mkhwebane's remedial actions against him.

Trengove told the high court on Tuesday that the question the court had to deal with at this stage was not whether remedial orders by the public protector were competent or lawful.

"The question is whether these remedial orders should be implemented despite the pending challenge. They should not be implemented as they may have far-reaching consequences‚" said Trengove.

Trengove said the orders were made to be implemented in the short term and said the deadline for some of the parties to implement the remedial action expired on August 4.

He said there was no reason for the urgent implementation of these remedial orders.

Trengove said the conduct in which she sought the minister to be disciplined occurred more than 10 years ago‚ but she wanted Gordhan disciplined within 30 days.

He said there was no reason to punish Gordhan before the court had determined whether the public protector's findings against him were unlawful.

"We ask the court to suspend these orders that the public protector made out of the blue‚ pending the determination of the lawfulness of the orders‚" Trengove said.

EFF supporters arrived in numbers outside the court. Party leader Julius Malema and his deputy Floyd Shivambu sat in the courtroom to hear arguments in Gordhan's urgent application.

The public protector opposes the application.

Madiba Street in front of the North Gauteng High Court in the Pretoria CBD has been temporarily closed for traffic due to dozens of protesters ...
News
2 years ago
Next Article