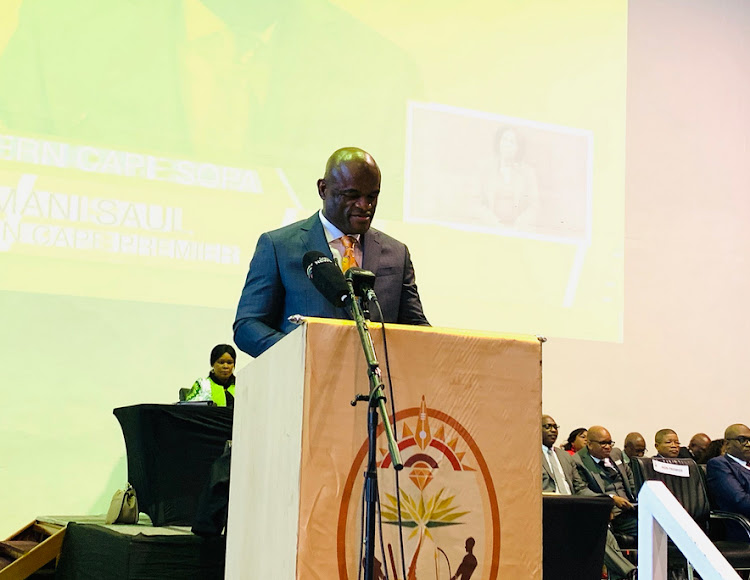 Paperless hospitals and ambulances that, like Uber can be monitored by cellphone.

These are some of the many changes the Northern Cape premier Dr Zamani Saul plans to introduce in the province. Speaking during his maiden state of the province address on Friday in Kimberley, Saul said that the days of living 100 years behind every other province were over.

He said that he was in a rapid drive to modernise and digitise the province that has been living in the past. “Electronic patient files will be implemented to improve file management. All these efforts will minimise medical litigations, reduce waiting times and enhance system efficiencies,” he said.

Saul said he will also see that hospitals are equipped with systems that continuously monitor medication stock to minimise and eventually end the normalised problem of patients being turned back due to shortage.

“Effective implementation and monitoring of the stock visibility system will ensure that clinics and hospitals never run out of medication and no patient is ever sent away without receiving medication because of stock outs,” he said.

In further bettering the healthcare system in line with his vision of making sure there are enough ambulances as “our people die while waiting”, Saul announced that families of patients who get picked up by ambulances will be able to monitor them through their mobile devices.

A first for the country, this system will most likely be developed in other provinces should it work seamlessly.

“I am also pleased to announce that a Computer Aided Ambulance Dispatch system will be operationalised in the call centres in Kimberley and Upington. This will ensure that we automate and modernise the communication systems to improve the response time of ambulances,” said Saul adding that this system will work like Uber.

He said that the lack of relations between the government and private sector was one of the leading causes of unemployment.

“Doors of private sector to provide opportunities to young people have been closed for far too long in our province. It is therefore critical to create a platform for engaging every sector aimed at collaborative partnerships to unleash and drive a massive skills revolution in our province,” he said.

According to Saul, 54% of the households in the province lived in poverty. He said this was one of the things that kept him up at night. “... it should be clear that we have to rapidly increase our efforts to fight these devastating challenges, in fact we should declare a full scale war against poverty and unemployment that rob so many of our Northern Cape people of their dignity and keep them in the shackles of economic bondage.

“There can be no dignity for a father or mother who cannot provide for the most basic needs of their children and families. How does a father look at his child when he returns empty handed from standing on the corner of Schmidtsdrift Road for the whole day without any success of finding a “piece job” so as to take home a bag of mealie meal or a loaf of bread for his children to have something to eat?,” he said.

He said will create and lead a war room tasked with fighting unemployment. This war room, he says, will be fully functional by October this year. It will, among others, identify people’s skills and find suitable jobs for them.

“We have tasked the National Youth Development Agency to develop and maintain a database of young unemployed graduates in the province for this purpose, while the Office of the Premier will develop a database of all young people who have been on learnerships and internships for tracking of absorption into labour market and economic participation. A similar database will also be separately maintained for young persons with disabilities.

“I also made a commitment that support functions in government will be used to create decent and sustainable jobs. In this regard we will introduce phased in-sourcing of support functions such as security gardening, cleaning and catering services,” he said.

#SopaNC attendees slowly coming in. The province is expecting at least 3000 people to attend. Premier Zamani Saul is scheduled to begin his address at 11am. pic.twitter.com/S5sfvPGKaA

Man with a plan

In his two hour long speech, Saul detailed a plan that left very little to imagine. On each of the issues that he spoke about he mentioned a problem and how it affects people clearly laid a plan on how to tackle it.

He said that for all the problems the province faces, he will ensure that capable leaders will be tasked with solving them.

“In seeking answers to these questions, we came to the conclusion that despite the challenges, there are some advantages and opportunities that, with collective effort, out of the box thinking, hard work and courage, can become the catalytic agents of our development into a Modern, growing and successful province.”

He said that in order to achieve this, he and his provincial executive will have to make sacrifices - which includes among others not having the ‘disruptive’ blue light brigades - in order to create financial advantages to the poor.

“If we fail the test of making personal sacrifices, then our commitment to eradicate the humiliation of poverty in the Province remains a mere pretext.

“Hence, as the executive of this sixth administration we will be the force of example by cutting back on executive luxuries and frills to ensure that the little resources that we have as the Province are directed towards development projects.

In this regard, we therefore commit to put ourselves at a disadvantage by pursuing an extremely modest lifestyle by seeking the modest and absolutely necessary benefits of the Ministerial Handbook,” said Saul.