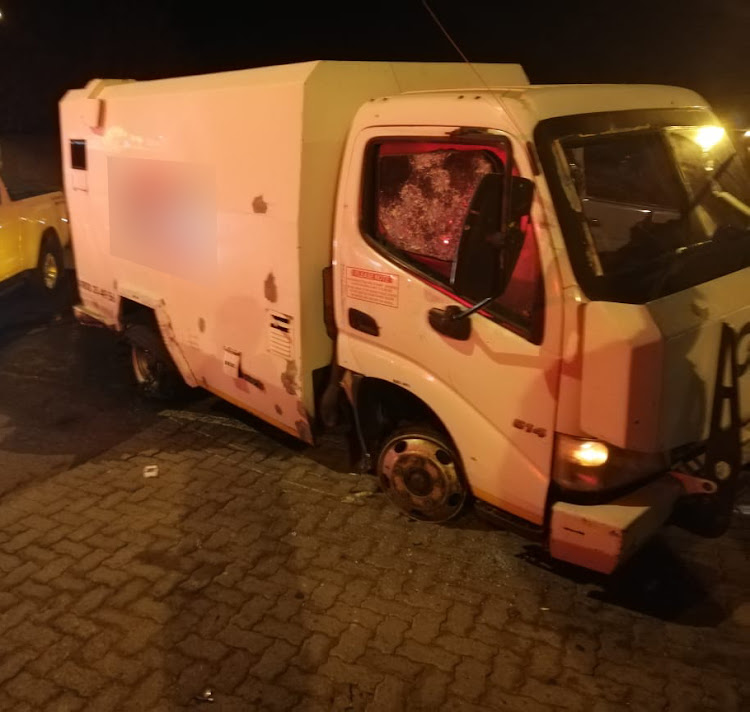 A security guard was injured during an attempted cash-in-transit heist in Krugerdorp, west of Johannesburg, on Monday evening.
Image: SUPPLIED

A security guard was shot in the arm during an attempted cash-in-transit heist in Krugersdorp, west of Johannesburg, on Monday evening.

"Shortly after 6.30pm, paramedics from ER24 arrived on the scene where they found the cash-in-transit vehicle halfway onto a pavement outside the Krugersdorp police station along Commissioner Street," said ER24 in a statement.

Paramedics found the security guard inside the vehicle with a gunshot wound to his arm. He was treated at the scene and taken to a nearby hospital.

"The driver of the vehicle was found inside the police station. He had no visible injuries but was later transported to a nearby hospital by another [ambulance] service for medical assessment.

"The exact circumstances surrounding the incident are not yet known. However, it is understood that the incident took place along another route and the driver of the vehicle managed to make it to the police station in Krugersdorp while being chased," said ER24.

Police were on the scene.

Former Luthuli House employee Present back in court in May

The matter against a former Luthuli House employee who is facing charges in connection with a Dobsonville cash-in-transit heist has been postponed.
News
2 years ago

Gauteng police have launched a manhunt for a gang who attempted to rob a goods truck on the R21, near Boksburg in Ekurhuleni.
News
2 years ago
Next Article