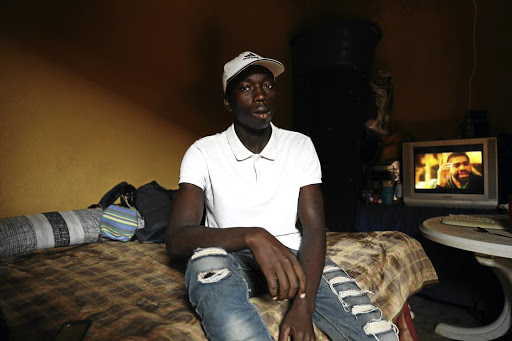 Phineas Langa lost his daughter after his girlfriend allegedly poisoned her. /Mduduzi Ndzingi

A distraught young father yesterday spoke of how his lover allegedly poisoned herself and her two children last week.

Their nine-month-old baby died on Friday after her mother allegedly fed her and her four-year-old sibling aldicarb - popularly known as galephirimi in the townships.

The four-year-old child was from the woman's previous relationship, while the nine-month-old was theirs. The deceased toddler's father, Phineas Langa from Mqantsa section in Tembisa, on the East Rand, said his girlfriend of six years poisoned herself and the children following an argument.

Langa, 23, said his girlfriend bought the deadly poison from the streets early last week to eliminate rats that have become a problem in their rented room in Mqantsa.

"There were two packets in a plastic. She used one on Tuesday and the next day we found several rats dead," he said.

Langa said he returned home at 6am on Friday after working night shift.

"I woke up at 11am and she made breakfast that we ate with the children. I left to see someone but she called, asking me to come back because she wanted to talk to me. We sat down and she told me that she was tired of living a lie. She said she lied to me about being pregnant. I told her that we should move forward and that I won't give up on her."

Limpopo police are looking for the people responsible for murdering three women in the early hours on Monday morning in Thohoyandou, Limpopo.
News
3 years ago

Langa said his girlfriend also told him that she wanted to move out of the room they shared. "I told her that I would not stop her but that I wanted to know where she was going so that I can visit my child. She asked for R250 and I said I did not have it. She started acting funny, pushed me around and choked me," he said.

Langa said his girlfriend then took the plastic that had the poison and threw it in her mouth. "I tried to stop her but she pushed me to the floor. She went out and took the children who were playing outside. By the time I got to her, I realised that the plastic had less poison in it," he said.

"I asked her if she gave the children poison but she did not answer me. I ran to my mother to ask for help. I then ran to my friend's place to ask for money to take them to hospital. By the time I returned, my child had already started vomiting."

Langa said he paid a taxi to take the three to the clinic. "I did not have the strength to go with them. I learnt a few moments later that my child was dead. She was my first child. I am still in shock. I can't believe that she did this.

The woman's family refused to speak to Sowetan.

Tembisa police spokesperson Capt Manyadza Ralidzhivha said the baby died at a local clinic, while the mother and the other child were admitted to hospital. "The accused was arrested and charged with murder and attempted murder. She is in hospital under police guard. The other child was also admitted."

The mother is expected to appear in court soon.