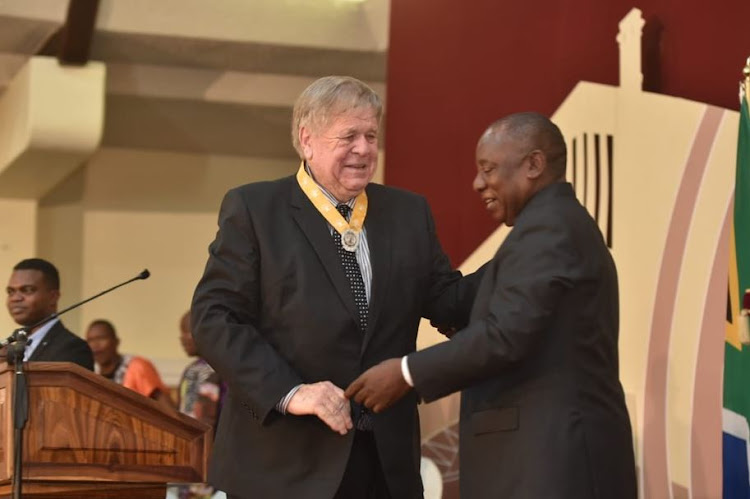 Veteran teacher William Smith is honoured by President Cyril Ramaphosa for his contribution to maths and sciences.
Image: Twitter / GCIS

Veteran teacher William Smith, whose 16-year stint as a television tutor earned him star status, says he was not great at maths in school, but perhaps that was the secret to him becoming a great teacher.

“It is such a tricky subject. Contrary to popular belief, I was an average student, I wasn’t smart in maths. I gave the subject my all, but it just wasn’t working, while on the other hand, I had friends who barely put in the work, but got distinctions," he told Times Select in an interview after he was honoured for his work by President Cyril Ramaphosa.

"Had I done matric in this era, I don't think I would have even made it to university. I got what we called second-class matric, and only began to excel in maths in my third year as a student at Rhodes University."

He attributes this to the kind of teacher he became.

Smith, 79, who received the Order of the Baobab for his contribution in maths and science, says whenever a pupil asked him a question, he did not only try to simplify it in the best way possible, but also put himself in the shoes of the pupil, and reminded himself that, for many years, he was just as lost.

The SABC was initially reluctant to give him and his team a platform to offer lessons live on television because that had not been done before.

He believes the current South African education system needs to equip pupils with skills that will help them succeed in their careers and in solving real-life problems.

"Some of what is being taught now is outdated and needs to be done away with. Take for example, the Doppler Effect in physical sciences. How many people use that in their careers and everyday life? Yet it is being taught. Shakespeare? Who needs and uses Shakespeare in this day and age?"

Smith says his career in television had a difficult start. The SABC was initially reluctant to give him and his team a platform to offer lessons live on television because that had not been done before.

But once given the opportunity, the broadcaster soon realised the demand for such services stretched far beyond South African borders. They then collaborated with other African countries via satellite, an expansion that saw viewership swell enormously.

"We were among the first to teach live, and the SABC was scared of the possibility of such a programme failing. Our first broadcast must have been in 1990, and we went on for almost 16 years, reaching as many as 100-million viewers a day across Africa."

Smith is now retired and lives in Australia, where he spends time with his family.

He said he is happy to see a younger generation of teachers continuing where he left off.

"There is such a huge gap between myself and the current generation, so the younger teachers must continue the work. I am now slowing down and am spending my time with my family, my grandchildren, playing Sudoku and travelling all over the world."

'There is no greater feeling than knowing I made a difference': William Smith

Veteran physics‚ maths and chemistry teacher William Smith said he was amazed by the love he had received from thousands of South Africans who had ...
News
3 years ago
Next Article