'Amcu is not a legitimate union' - Labour department 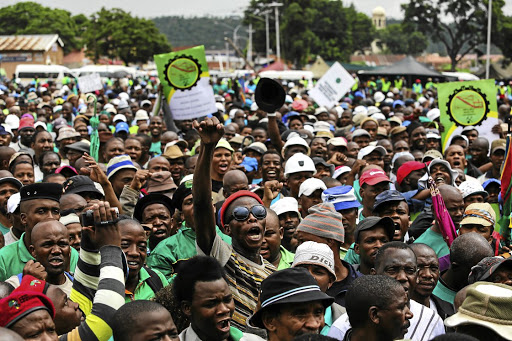 The labour registrar is poised to cancel Amcu's registration as the union has not held leadership elections since 2013.
Image: Moeletsi Mabe

Association of Mineworkers and Construction Union (Amcu) is no longer recognised as a legitimate union and risks being deregistered.

According to a registrar of labour notice in the Government Gazette yesterday, Amcu has not been operating as per the Labour Relations Act after failing to elect its leaders at an official congress.

As far as the department of labour is concerned, Amcu does not have legitimate office bearers as their elected term of office has lapsed.

"To be in good standing, they need to follow their constitution, they need to have their national congress that will then be able to rectify their standing," said department of labour spokesperson Teboho Thejane.

According to its constitution, Amcu is supposed to have a national congress where leaders are elected every five years, but the department of labour is concerned that the union last held its congress in January 2013.

The curtain looks set to fall on one of SA's most militant and disruptive unions after it ended a five-month gold strike empty handed.
News
2 years ago

Thejane said several positions, including that of president Joseph Mathunjwa, his deputy, treasurer-general and national chairperson among others, were, as of 2018, illegitimate as they are supposed to be elected at national congress.

According to the department, the intention to cancel Amcu's registration comes after the union's promise to have its congress next month, which seemed impossible as the union had not informed its regions of the proposed dates.

Amcu is one of the biggest trade unions in the country with over 200,000 members.

Mathunjwa said he was aware of the labour registrar's intent to cancel the union's registration but said he could not comment.

The notice by the registrar of labour gave Amcu and other interested parties 60 days to submit reasons why the union's registration should not be cancelled.

The Association of Mineworkers and Construction Union (Amcu) said it would continue with its four-month strike at Sibanye-Stillwater's gold ...
News
2 years ago

A protracted strike waged by the Association of Mineworkers and Construction Union might soon come to an end after the union's members agreed to ...
News
2 years ago
Next Article