Teacher who filmed Carletonville creche assaults not arrested, yet 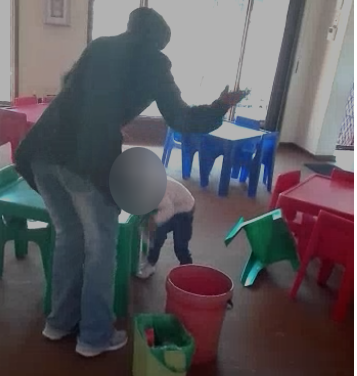 Police have confirmed that the teacher who filmed several disturbing videos of another teacher assaulting toddlers at a Carletonville crèche has not been arrested.

This is after the attorney representing the crèche’s principal, Danie van Zyl, said on Thursday that the teacher who assaulted the learners had been arrested and released on bail while the one who filmed the assaults was expected to be arrested "in a few hours".

"Police cannot confirm what the lawyer said. Other than the arrest of the 40-year old woman depicted on the video, I can confirm that there have been no other arrests," said  provincial spokesperson Brigadier Mathapelo Peters.

Van Zyl revealed that the teacher who took the videos was a disgruntled former employee at the creche. She used the videos to blackmail the principal into giving her money.

"She threatened that she would make these videos viral and send them all over the country and to the parents because she wants to teach her a lesson. That transpired because she was dismissed for an earlier incident involving some alleged dishonesty," said Van Zyl.

The three videos depicting the assaults caused outrage. If the dialogue heard on the video is anything to go by, one of the toddlers was beaten for vomiting, while another was beaten for not wanting to sleep.

In the wake of a series of videos showing how a Carltonville creche teacher assaulted several toddlers, parliament's portfolio committee on social ...
News
3 years ago

Gauteng's social development MEC Nandi Mayathula-Khoza visited and closed the crèche because, although it was registered in the 2015/2016 financial year, the registration was never renewed as required.

Following the closure, parents of the registered learners have been left in the lurch.

The burden of finding alternative daycare centres and getting refunds lies ahead.

Following the ordeal, MP and chief Mandla Mandela on Friday called for crèches in the country to be thoroughly vetted.

"We further call on our government to undertake a national audit of such institutions and ensure that an ethical code of practice and minimum standards of child protection and care is adopted that will grant parents, guardians and custodians peace of mind while they place their children in the care of others," said Mandela.