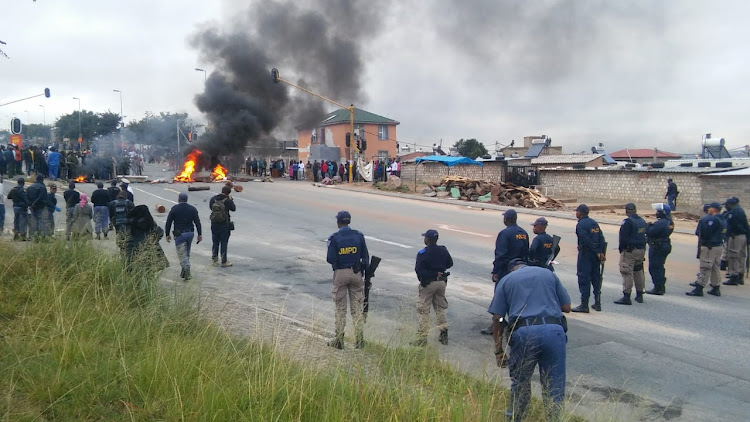 Passengers arriving at the Marlboro Gautrain station have had to be sneaked out through another exit as Alexandra residents staged a protest over service delivery on Tuesday morning.

While police successfully defused protests in other parts of the township, the protest next to the Marlboro Gautrain station simply had gained momentum.

Residents barricaded the road leading to the station with rocks and burning tyres demanding to speak to the director of the City of Johannesburg Region E office.

Among their concerns is the issue of people putting up shacks anywhere they like without following municipal requirements.

Thandiwe Mthombeni, one of the organisers of the protest, said: “It is all about service delivery. The municipality does not attend to our problems. We’ve been logging calls to the municipality regarding illegal structures in our neighbourhood and nothing has happened. We’ve called the police and officials to help stop people from building anywhere they like but nobody is hearing our cry,” said Mthombeni

“We’ve been complaining to Pickitup about the collection of waste in our area and nothing has happened. They have turned our place into a scrap yard. There are people who come from nowhere and start building under pylons. Recently a pylon fell and burnt a number of shacks.”

Mthombeni added that the township had also become unsafe as a result of drug dealing and house robberies which have shot up. The community marched to municipal offices in Sandtown six weeks ago  to deliver a memorandum of demands.

Police are currently negotiating with the leaders of the protest in an effort to clear the road leading to the Gautrain station.

There is no schooling, no public transport and all businesses in the township are closed.

Alexandra residents have shut most of the entrances to the township in protest against bad policing and decay of the township.
News
2 years ago
Next Article