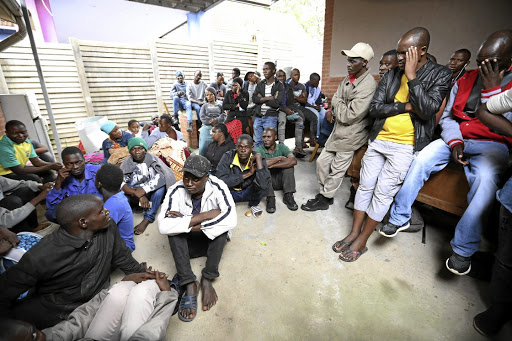 Malawians who were attacked in Durban seek refuge last week at the Sydenham police station./Jackie Clausen

President Cyril Ramaphosa has called for law enforcement agents to identify and prosecute those involved in recent attacks on foreign nationals.

This followed reports this week of foreign nationals being targeted in sporadic outbreaks of violence in the Sydenham and Overport areas in KwaZulu-Natal last week.

Pope Francis used a visit to the north of the continent to plead against "theatres of violence, exploitation and abuse" of migrants and refugees.

In at least two cases, foreigners were forced to seek refuge at local police stations in Durban.

More than 100 Malawians who were displaced during an attack on foreign nationals at a Durban informal settlement last week have asked to be ...
News
2 years ago

Yesterday, minister of international relations & cooperation Lindiwe Sisulu and minister of police Bheki Cele held a meeting with African diplomats to discuss the current spate of violence against foreign nationals and their properties.

Ramaphosa condemned the violence yesterday, saying there was "no justification for criminality". "As South Africans, we owe our freedom to the solidarity and support given to our liberation Struggle by people across our continent and around the world.

"Today, our economy and society benefits from our extensive trade and investment relations with partners on our continent and many of our continental compatriots live in South Africa, where they are making important contributions to the development of our country.

"African development depends on the increased movement of people, goods and services between different countries for all of us to benefit. We will not allow criminals to set back these processes," Ramaphosa said.

The Pontiff encouraged host countries to "appreciate and utilise the contribution made by migrants, while working to forestall all forms of discrimination and xenophobia".

"The side of the border on which a migrant stands does not make him or her more or less human."

Speaking at an aid centre for migrants in the Moroccan capital Rabat at the weekend, Francis slated those blind to the suffering of others. "How arid and inhospitable a city becomes once it loses the capacity for compassion. A heartless society - a barren mother."

Anti-immigrant rhetoric has been on the rise around the world and in political messaging ahead of the May general elections in SA.

ANC leaders, including Ramaphosa, promised a clampdown on undocumented foreigners, while the DA is advocating for tighter border control.

Speaking at an ANC fundraising dinner on Friday, Ramaphosa said: "These recent attacks are wrong, they violate everything that our people fought for over many decades. As for me, I condemn them in the strongest terms, because this is not us."

Speaking on UkhoziFM on Saturday, Ramaphosa said attacks on other Africans were criminality not xenophobia.

". it shows the rest of the world that there's xenophobia in South Africa and that's not true. There's no xenophobia in this country."

Francis said it was essential that everyone be guaranteed the right to the medical, psychological and social assistance needed to restore their dignity.

The issue of healthcare for foreign nationals has also become topical in SA.

Addressing thousands of people at an official ceremony hosted by King Mohammed VI, Francis said: "The issue of migration will never be resolved by raising barriers, fomenting fear of others or denying assistance to those who legitimately aspire to a better life for themselves and their families."

Moroccan foreign minister Nasser Bourita told Sowetan in an interview ahead of the pope's visit that there was "convergence" between Francis and the king on the treatment of migrants.

King Mohammed said religion should no longer be "an alibi for ignorant people".

"What all terrorists have in common is not religion but rather ignorance of religion."