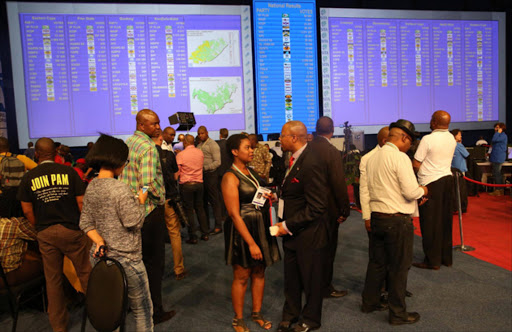 File photo of representatives of political parties gathered to see the election results as they come in at the IEC results centre in Pretoria.
Image: SYDNEY SESHIBEDI/THE TIMES

Lists of candidates nominated by political parties to contest the elections nationally and provincially are now open for public scrutiny.

Members of the public may lodge objections to any candidate nominated by a political party, the Electoral Commission of SA (IEC) said. The lists are available on the IEC’s website. Objections have to be lodged by 5pm on April 2.

There are 48 political parties contesting the May 8 election. This includes some newcomers such as Patricia de Lille’s Good Party; the National Union of Metalworkers of SA’s Socialist Revolutionary Workers Party; former SABC COO Hlaudi Motsoeneng’s African Content Movement (ACM); the controversial Black First Land First (BLF); the African Transformation Movement (ATM), who has Mzwanele Manyi as its policy chief; and the Capitalist Party of SA (ZACP).

The ANC has received criticism for the lists it submitted to the IEC in February. The list included controversial politicians and those who have been implicated in state capture or accused of lying under oath, such as Bathabile Dlamini, Malusi Gigaba, Mosebenzi Zwane and Nomvula Mokonyane.

The top spot was won by the African Security Congress.
News
3 years ago

ANC head of elections Fikile Mbalula has said the party’s lists are not set in stone, adding that if a candidate’s integrity was in question, the ANC’s integrity commission could haul it before it and ask someone to step aside because “the movement is taking a hit”.

The integrity commission, however, is still waiting for the ANC national executive committee (NEC) to finalise its terms of reference. Until then, the commission cannot act of its own volition, but needs to have matters referred to it by the NEC.

According to the Electoral Act objections may be lodged against a candidate if they do not qualify to stand for elections; if the candidate did not sign the prescribed acceptance of nomination; or if there is no prescribed undertaking signed by the candidate that they bound to the code of conduct.

According to the constitution, any citizen who is qualified to vote may be a candidate. The only exceptions are unrehabilitated insolvents; anyone declared unsound of mind by a court; or anyone convicted of an offence and sentenced to more than a year in prison, without the option of a fine.

The IEC said it will consider and make a determination on all objections and notify the objectors and affected parties of its decision by April 8. An objector will then have until April 11 to appeal the commission’s decision at the Electoral Court.

The fight for votes ahead of the May general elections is in full swing. This is after the African National Congress (ANC) accused the African ...
News
3 years ago

Makhosi Khoza has yet again switched positions in her never-ending game of political musical chairs.
News
3 years ago
Next Article