Cyril not fazed by Zuma's claims on spy report 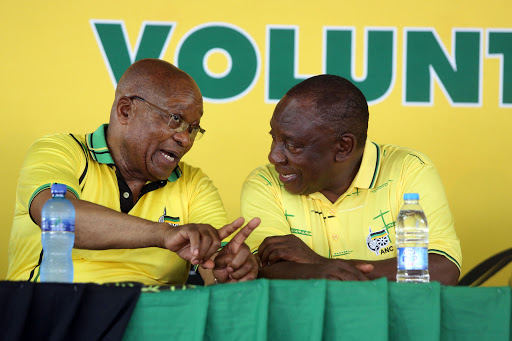 ANC president Cyril Ramaphosa is unfazed about his predecessor's assertions that the recent findings by the high-level panel review report into State Security Agency (SSA) was going to open a can of worms which they may regret.

This follows the report alleging that former president Jacob Zuma used the intelligence services for his own political and personal interests.

"I feel nothing when apartheid spies call me corrupt. I hope people are not opening a can of worms which they might regret," Zuma warned.

However, Ramaphosa during his campaign trail yesterday said he accepted the findings of the report. "It's good to be transparent and let these things come out so that we can repair whatever damage has been done in the past. We're now on a really good and strong path. this is how we continue to build the state.

He was speaking to eNCA in downtown Johannesburg yesterday. "State craft is about making sure that you repair whatever damage has been done. and you move forward."

The panel was appointed by Ramaphosa in June last year to assess the structure of the SSA relative to its mandate and to inquire into its systems and capacity.

While the he 127-page report doesn't mention Zuma by name, it alleged that he abused state security for his own benefit, including to spy on his political contenders.

Yesterday, the DA, the SA Federation of Trade Unions (Saftu) and Right2Know called for the arrests of those implicated in the explosive report.

Saftu said Zuma, former intelligence ministers Siyabonga Cwele and David Mahlobo, and former SSA head Arthur Fraser, should be arrested for defeating the ends of justice and "possibly for treason". The DA said criminal charges should be opened against Cwele, Mahlobo, Fraser and the SSA's former head of special operations Thulani Dlomo as much of the wrongdoing happened under their watch.

President Cyril Ramaphosa recently released the High-Level Review Panel report into South Africa's State Security Agency (SSA). The panel which was appointed in June 2018 assessed the structure of the agency and made some damning findings. Here's all you need to know about the report, its findings and recommendations.

The Presidency has declined to respond to former president Jacob Zuma’s allegation that two members of the high level review panel on the State ...
News
2 years ago
Next Article