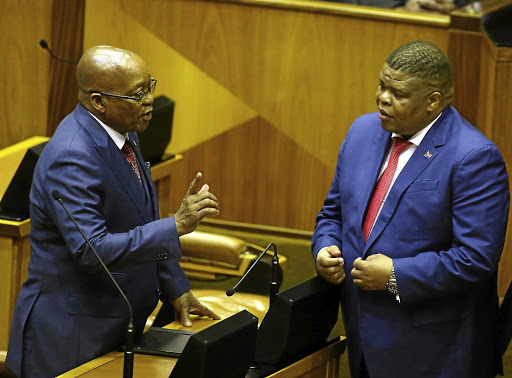 The report, which was compiled by a panel led by former minister Sydney Mufamadi, claimed that Zuma spent millions on dirty tricks in an effort to sabotage Ramaphosa to be ANC president.

Though he did not mention Ramaphosa by name, Zuma Tweeted that he has "never written to the SB".

This was apparently in reference to a claim made by Cope leader Mosiuoa Lekota in parliament that Ramaphosa "sold out" his comrades in the 1970s by writing to the apartheid Special Branch police asking for clemency.

Zuma also claimed that the committee, headed by Mufamadi, has apartheid spies in its ranks.

"This committee has two well-known apartheid spies. I have never sold out nor written letter to SB (the Special Branch)," Zuma wrote.

He said he felt nothing when "apartheid spies" call him corrupt and then added: "I hope people are not opening a can of worms which they might regret."

The report further claimed that Zuma spied on civil society organisations critical of him.

The report said agency spies tried to prevent Ramaphosa's supporters from distributing campaign regalia at the ANC birthday celebrations in Rustenburg in 2016.

The announcement of a new Scorpions-like unit to fight corruption, and the splitting of Eskom into three, dominated the news following President ...
Opinion
2 years ago

State Security has told the publisher of "The President’s Keepers" to cease and desist from printing any more copies.
News
3 years ago
Next Article