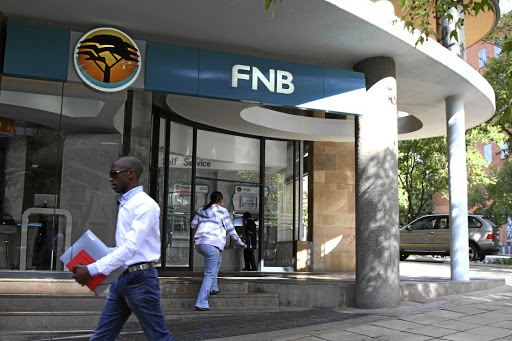 A customer enters an FNB branch in Johannesburg. The bank has been accused of overcharging black homeowners.
Image: Nadine Hutton/Bloomberg via Getty Images

The Black Business Council (BBC) is expected to meet with the Banking Association of SA and other stakeholders over alleged discrimination of black homeowners by FNB and other banks.

Other stakeholders who are expected to attend the BBC include the Financial Sector Conduct Authority, National Credit Regulator and financial investigating consultant Emerald van Zyl.

This will assist the BBC to garner more information regarding the alleged discrimination by banks.

The black homeowners, who featured on the programme on Sunday night, claimed that they were charged higher interest rates on home loans compared to their white counterparts.

They now want FNB, which one homeowner described as a racist bank, to reimburse their money.

The ANC has called for the banks to keep the accounts of Bosasa open to allow employees to receive their salaries.
News
3 years ago

They have also approached the Western Cape Equality Court to hear their matter.

"They are a racist bank," he said.

Frans Mokomane, a police officer in KwaMhlanga in Mpumalanga, said the idea of selling once crossed his mind because he could not keep up with the ever increasing cost of interest rates.

Mokomane and his neighbour Justice Mapulane said though they had paid off their bonds, they wanted their money back, which they say FNB took in a discriminatory manner.

FNB has dismissed the allegations as baseless, adding that it will defend the matter at the Equality Court.

Van Zyl confirmed in the programme that he had been fighting the banks and their abuse of consumers for years.

He said people were suffering because of the greed of the banks. Van Zyl said the total claim of the illegal and inflated rates for black homeowners was likely to be in the excess of R3bn.

The Banking Association of SA refused to comment on individual banks, while the Reserve Bank said: "This is a conduct matter which falls under the mandate of the Financial Conduct Authority in terms of the Financial Sector Regulation Act. We would recommend that you reach out to them."

Knowing bank charges can help save you a few rands

If you feel you're paying too much in bank fees every month, you should check out what other banks are charging.
Business
3 years ago

Ombudsman for Banking Services, Reana Steyn, said they had found no proof of racism from the few complaints they had received.

The BBC said it will follow the developments at the Western Cape Equality Court in order to determine an appropriate course of action.

"We take any allegation of discrimination against black people extremely seriously as we advocate for black people to play a meaningful role in the mainstream economy," said BBC president Sandile Zungu.

"Such practices further strengthen the case for having banks that are majority owned and controlled by black people to ensure black people and businesses are not victims of arbitrary discriminatory and exclusionary practices," he said.