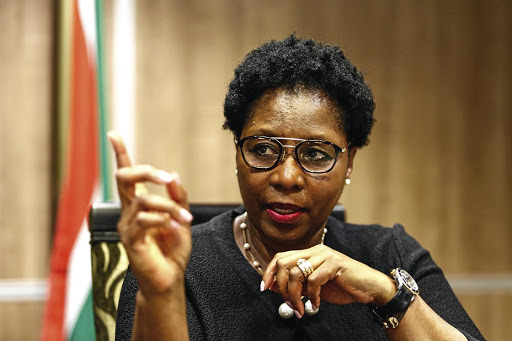 Parliament's ethics committee has found that public service and administration minister Ayanda Dlodlo breached the code that guides MPs' conduct when she did not declare her stay at Dubai's Oberoi Hotel which was paid for by controversial businessman Fana Hlongwane.

Dlodlo's sanction will be a reprimand in the house.

In June 2017, DA MP Phumzile van Damme lodged a complaint with the committee following a report published by the Sowetan newspaper on June 5 2017 that Dlodlo, then deputy minister of public service and administration, stayed at the luxury hotel in 2015 and enjoyed spa massages, room service and car hire - none of which she paid for.

The article alleged that the Gupta-owned company Sahara booked the accommodation but Hlongwane paid the invoice.

Dlodlo was charged for not disclosing the benefit, as is required by the code of ethical conduct and disclosure of members' interests.

Senior state employees received a tongue lashing from parliament for failing to declare their business interests – a failure that could leave the ...
News
3 years ago

A report of the joint committee on ethics and members' interests published by parliament on Monday reveals that Dlodlo told the committee, which meets behind closed doors, that she and Hlongwane were childhood friends and that they considered themselves "sister and brother".

Dlodlo explained that while she and Hlongwane are not blood relatives, Hlongwane’s biological father housed and cared for her and her family. "Therefore, the member [Dlodlo] was considered family of Mr Hlongwane according to 'African culture'," reads the report.

It further states that when Dlodlo undertook to meet Hlongwane in Dubai, she never saw it as anything other than a holiday with her brother. "The member categorically stated that at no time was she linked to any Gupta business, that she never met the Guptas and that she has never accepted anything from the Guptas.”

Dlodlo further told the committee that the reason she did not declare the stay at the Oberoi Hotel and the additional benefits of spa massages, room service and car hire was because she considered Hlongwane her brother.

MPs disagreed, according to the code which provides that gifts and hospitality in excess of R1,500 from a source other than a family member or permanent companion or gifts of a traditional nature must be disclosed.

The committee also ruled that while the code refers to a “family member”, its definition section refers to “immediate family” - meaning only a member’s spouse, permanent companion or dependants.

"The definition of 'immediate family' does not cover the type of brother-and-sister relationship that exists between Mr Fana Hlognwane and the member," said the committee in its report.

"Having considered the explanation given by the member, the committee concluded that it is clear that Mr Fana Hlongwane is not her spouse, permanent companion or dependent. The member was therefore obliged to disclose her stay at the Oberoi Hotel (accommodation), the spa massages, room service and car hire," it said.

The penalties provided by the code against offending MPs include:

ANC MP Zukiswa Rantho has attacked former acting boss of Eskom Matshela Koko, calling him a loyal servant of the Guptas and a "possible criminal".
News
2 years ago

Another ANC MP, Nyami Booi, was found guilty of breaching the code for his failure to declare a R60,000 monthly salary from a company called Lurco Coal. Booi entered into an indefinite agreement with the company on December 1 2015 to act as a consultant on a nonexclusive basis, advising on stakeholder relationship management (among other things) on an ad hoc basis.

DA MP James Lorimer lodged a complaint against Booi in May 2017, complaining that Lurco had entered into contracts with Eskom. He charged that Booi's actions went against the code, which prohibits MPs from undertaking remunerative work outside of parliament that is not sanctioned in terms of the code.

The report reveals that Booi acknowledged the business consultation agreement with Lurco. He apparently expressed regret and stated that it was an oversight that he did not disclose the information. “The member undertook to rectify the nondisclosure with immediate effect," reads the parliamentary report.

The ethics committee recommended that Booi be reprimand in the house and that he be fined an amount equal to 45 days' salary.