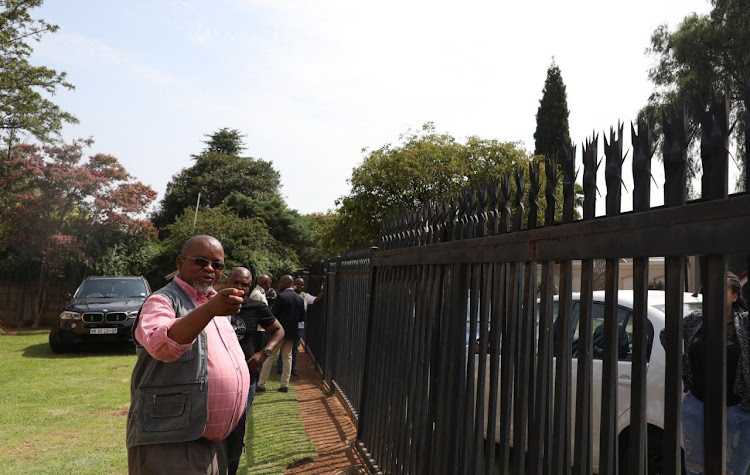 Mineral resources minister Gwede Mantashe has denied claims that he benefited from Bosasa in the form of bribery to install security cameras at his Boksburg home on the east rand.

Mantashe was fingered to have allegedly benefited from R300,000 to upgrade security at his three homes - one in Johannesburg and two in the Eastern Cape - in the form of CCTV installation and electric fencing at his properties.

"This is my house that is self-built, not sponsored by Bosasa," he told journalists on Saturday. "The reason why I wanted you to come here is to demystify that there must be no attempt to talk of an electric fence; it has never been here," said Mantashe.

"There has never been an alarm system nor an intercom. If you want to come here, you use a small gate and if we are sleeping, you throw a stone on the roof or if you have a car, you hoot if you want us to wake up," he said.

Mantashe's remarks follow damning allegations two week ago when Richard le Roux, a former Bosasa employee, testified before the state capture commission of inquiry that he had managed a team of technicians who worked on "Special Projects" – where he was required to travel around the country to instal security systems at the homes of government officials, including Mantashe.

Le Roux told deputy chief justice Raymond Zondo that he was not aware of any of the beneficiaries paying out of their own pockets for the work that was carried out.

However, Mantashe told journalists on Saturday that since he bought his house in 1995, he has had two break-ins which prompted him to install security cameras at the house.

SowetanLIVE counted nine cameras within Mantashe's yard which still had serial numbers on them and didn't see any electric fencing at his Boksburg home, while his two other properties in the Eastern Cape remain to be seen.

During an interview with eNCA, Bosasa executive director Papa Leshabane seemingly confirmed that Mantashe had personally called him to have the installations done at his homes.

However, only hours later Leshabane changed his tune, saying he "never interacted with Mr Mantashe directly" but rather with his "security detail".

Mantashe's head of security when he was secretary-general of the ANC, Mzwakhe Nyakaza, on Saturday denied these claims, saying that he personally went to the East Rand Mall and paid R10,000 for security cameras for Mantashe's home after the break-ins.

Nyakaza said that when Leshabane - who according to Mantashe is a family friend - came to visit the family, he told them that he would change the cameras as they were not up to standard.

"He [Leshabane] said 'no, no look mchana, these cameras are very weak, they won’t be able to give you the view that you want to have, but I can organise a proper one for you' and I said that would be fine," claimed Nyakaza.

He said Leshabane told him that Le Roux would be the to-go person if he encountered any problems with the cameras that would be installed.

"On 28 June 2016, I experienced some problems with the cameras and I sent a message to  Mr Richard [le Roux] and he said he would come to check what's the problem and the following day, somebody else came to fix the problem," said Nyakaza.

"I decided to put cameras [in] with the consultation with the secretary-general at the time and I also spoke to uMama [Mantashe's wife] to organise for me some cash so that I can be able to buy the cameras at East Rand Mall."

Bosasa has been in the spotlight recently after its former and current executives gave evidence before the commission of inquiry that it bribed senior ANC politicians and civil servants to score lucrative government tenders.