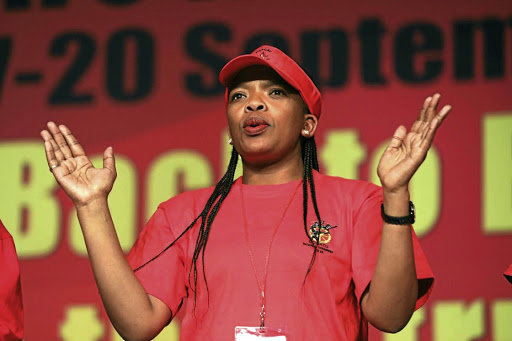 Cosatu has called on ANC members implicated in wrongdoing to recuse themselves from the party's list of candidates for parliament and provincial legislatures.

The call comes after explosive evidence was given by various executives of Bosasa, now known as African Global Operations - among others at the state capture commission of inquiry.

"Since the revelations have come out, you have less of those who are coming out and saying they want to go to the Zondo commission [of inquiry] to state their innocence," said Cosatu president Zingiswa Losi speaking at a media briefing yesterday following Cosatu's special central executive committee meeting.

Losi said the ANC's Nasrec national conference in 2017 agreed to protect the integrity of the organisation.

She said, therefore, anybody tainted by corruption - in particular those individuals who have failed to come forward to
either cross-examine or give testimony - should be the first to go.

"We are saying that in the process that you are also trying to clear your name if you have any intentions [to do so, the least you can do is to protect the integrity of the organisation and, of course, we understand that you are presumed innocent until proven guilty," said Losi.

Trade union federation Cosatu has called for a speedily prosecution of those accused of wrongdoing in government.
News
3 years ago

ANC NEC member and environmental affairs minister Nomvula Mokonyane and ANC MP Vincent Smith are among those fingered as having benefited from Bosasa by former boss Angelo Agrizzi.

Although Losi didn't mention them by name, she said if the individuals did not take it upon themselves to go and testify at the commission, they leave the public with no choice but to believe the allegations levelled against them.

"We are now going into an election and when your name is named timeously and you are not saying anything, you are leaving us - in particular the voters - to believe that what is being said about you has the potential of being correct," Losi said.

To date, Mantashe is the only ANC member who has committed to give evidence after it was claimed that Bosasa paid hundreds of thousands of rands to upgrade security at his homes.

Meanwhile, Cosatu said its planned national strike under the banner "no retrenchments, jobs for all" will take place on February 13 in eight provinces and another one on February 19 in Cape Town to coincide with the budget speech the next day. Losi said the planned strike aimed to highlight the recent jobs losses and the planned retrenchments at the SABC.