Zulu ceremony surges ahead despite objection 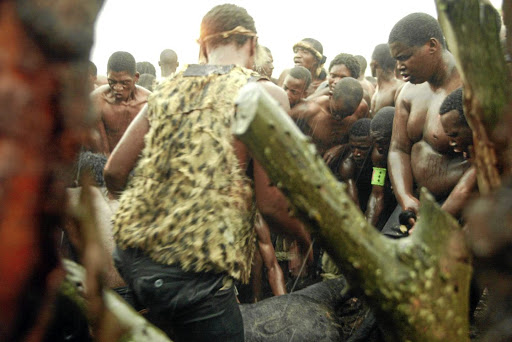 Young Zulu warriors hold down a bull in a ceremony of slaughtering it without weapons to mark the start of the first-fruits ceremony to be led by the king. /Thembinksosi Dwayisa

The festival, which has courted controversy in the past after it was challenged by animal rights activists, will see young men kill a bull with their bare hands inside the kraal at the palace as a symbol of their bravery.

This ritual killing of the bull by amabutho (warriors) is the major highlight of the festival.

The animal is overpowered and suffocated with hands. Its neck is then broken in a manoeuvre that it is said causes a quick and painless death.

No bloodletting of any kind, or dismemberment of any part of the beast, is allowed during the ritual slaying.

The annual ceremony takes place in December, during which the Zulu monarch will take a very symbolic taste of the first fruits and pray to God to bless the land to produce food in abundance for his people. During the ceremony, King Zwelithini will spend some time in isolation, observing certain cultural rituals.

The five-day festival is believed to provide the king with strength and power.

Taking the bull by the horns ... and slaughtering it

Hundreds of young Zulu warriors are bracing themselves for Umkhosi Wokweshwama (first-fruits ceremony).
News
3 years ago

COSATU has applauded King Goodwill Zwelithini's historic decision to revive the practice of circumcision among young Zulu men as part of the ...
News
12 years ago

The king also uses the ceremony to talk to the nation, especially young men, about issues including the spread of HIV/Aids, moral regeneration, abuse of women and children and how to conduct themselves to be role models within their communities.

In recent years, the festival, believed to have been in existence among the Nguni people for 3,000 years, has come under fire from animal rights activists, including the Animal Rights Africa, over the ritual bull slaughter.

So intense was the objection to the ritual that in 2009 Animal Rights Africa, an NGO, went to court in a bid to stop the practice, saying it was an act of cruelty to animals.

Amid the outcry, former public protector Thuli Madonsela sent a representative to compile a report to determine the future of the old ritual, but nothing has changed.

King Zwelithini was furious at attempts to ban the ritual.

"We are baffled by people who think that we have to explain to them what we do and why we have to do it .

"We do not need people to tolerate us, but for them to accept that we have the right to practise our religion as Zulus, and we will not stop doing it," the king said.

He had the backing of Judge Nic van der Reyden of the Pietermaritzburg high court who expressed reservations in commenting on the matter, saying that the bull-killing ritual went to the heart of the Zulu tradition.

He likened stopping the practice to ordering Catholics to stop taking communion.

"This has been done for years. It is done by Zulus, who constitute the biggest population in this country," Van Der Reyden said.