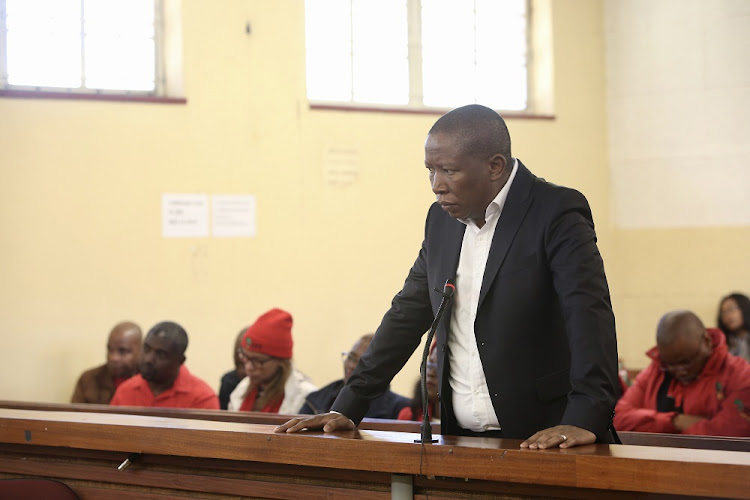 The National Prosecuting Authority (NPA) says EFF leader Julius Malema’s call for people to occupy land constitutes "incitement to break the law" and could lead to "anarchy" and violence.

Arguing for the NPA‚ advocate Hilton Epstein stressed in the North Gauteng High Court on Wednesday that the land issue was deeply emotive and "highly charged"‚ and that Malema was constitutionally entitled to discuss and debate it.

What he was not entitled to do‚ he said‚ was incite people to break the law in circumstances where such calls could lead to imminent violence - an accusation that Malema’s lawyers have denied.

Epstein further argued that there was nothing in the constitution that stated that property rights were secondary to Malema’s right to freedom of expression. Should Malema’s call "be taken up by even a fraction of his followers‚ it would trigger a mass violation of property rights".

EFF leader Julius Malema is expected to appear in the North Gauteng High Court on Wednesday in a case related to his call on supporters to invade ...
News
3 years ago

Malema faces separate charges under the 1956 Riotous Assemblies Act and Trespass Act for inciting people to occupy any vacant land that they may find. He and the EFF are now challenging the constitutionality of the laws used to charge him.

The EFF is seeking an order that the Riotous Assemblies Act is invalid as a "remnant of the apartheid order" that violates the right to freedom of expression. Second‚ the EFF wants the court to set aside the NPA’s decision to prosecute Malema‚ on the basis that the state was driven by improper political motives.

Malema has raised the alarm about the October 2016 meeting held between then president Jacob Zuma and then prosecuting head Shaun Abrahams just days before he and then finance minister Pravin Gordhan were separately charged - Malema for inciting land grabs and Gordhan for fraud linked to an early-retirement payout given to former Sars commissioner Ivan Pillay.

The charges against Gordhan were dropped two weeks later.

But the charges against Malema‚ which relate to various incidents in which he urged EFF supporters to occupy land‚ remain.

Abrahams has stated in court papers that Malema's position "is a frontal assault on rule of law".

EFF leader Julius Malema appears in the North Gauteng High Court in a case related to his call on supporters to invade vacant land.
News
3 years ago

"He contends that what his party sees as inadequacies in the land redistribution policies of the duly elected government justifies him in urging his supporters to grab land by (to use his words) any means necessary. This is profoundly at odds with the democratic ethos of the constitution‚" Abrahams states.

"Free expression is cherished in our democratic constitutional order because it protects the rights of people to hold government accountable and to change the government if they are unhappy with how it is running the country.

"It is an abuse of free speech to use it to ram through an ideologically driven agenda that would upend the constitutional settlement that brought an end to apartheid," he said.

The NPA is also opposing the EFF’s application for an order that will stop the police from forcibly removing the illegal occupiers of land and demolishing their shacks. Instead‚ it wants such cases to be dealt with by the courts‚ through the application of eviction law.

This‚ EFF advocate Tembeka Ngcukaitobi argued‚ is because the Trespass Act was designed to "protect landowners from the landless"‚ and "criminalised people made landless by racist apartheid policies".