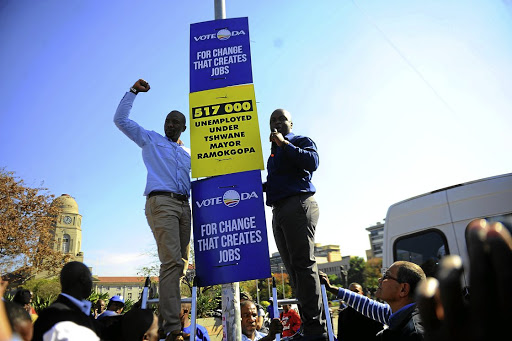 Msimanga has thrown down the gauntlet at Maimane in the latest salvo with Mosola stating, "it's either this man goes or I go", in a letter in which he indicated he has had enough.

Yesterday, Maimane's chief of staff, Graham Charters, confirmed he has received the letter from Msimanga in which he details all the problems the city manager has caused in the country's capital.

"Yes we have received it. He is still applying his mind to the matter," Charters replied.

Solly Msimanga has refused to be drawn into another public spat with his city manager Moeketsi Mosola.
News
3 years ago

In his plea for Maimane's intervention, Msimanga detailed the problems that Mosola has caused the DA-led city. He claims even service delivery has deteriorated as a result of their bitter fight.

He has asked Maimane to speak to the EFF to persuade it to support a move to suspend or remove Mosola.

Msimanga accused Mosola of threatening officials almost on a weekly basis because they refuse to do wrong.

"The incentive is for officials to only follow the instructions of the city manager and ignore most of MMCs," the letter read.

"We have crucial tenders that never get to be awarded, recommendations and appointment letters sit on the city manager's desk for a long time, waiting for his signaturewhile services suffers."

Msimanga accused Mosola of allowing contracts to lapse, which compels the city to move into extensions.

Among the contracts mentioned is onethe city has with Vodacom for the provision 3G services to councillors, meter readers and even cellphones used by emergency services personnel.

The contract was allowed to lapse, added Msimanga, "because the city manager ostensibly preferred a deal with Telkom, who he was advised by his subordinates would be more expensive".

The relationship between Msimanga and Mosola has hit rock bottom since the Glad Africa scandal.

Mosola is being investigated by the city for a R12bn contract awarded to GladAfrica.

In September, Mosola faced a possible suspension but survived when council changed its tune and resolved that the probe against him happen while he remained in office.

Tshwane Metro COO James Murphy has distanced himself from the controversial appointment of GladAfrica.
News
3 years ago

Msimanga complained Mosola has not been attending meetings of the service delivery war room he established.

The Glad Africa contract was also raised by Msimanga in his letter.

"In several instances, including the Glad Africa matter, crucial information including tender amount, scope, name of service provider [were] never reported to the mayoral coms."

Mosola was not available for comment at the time of going to print.