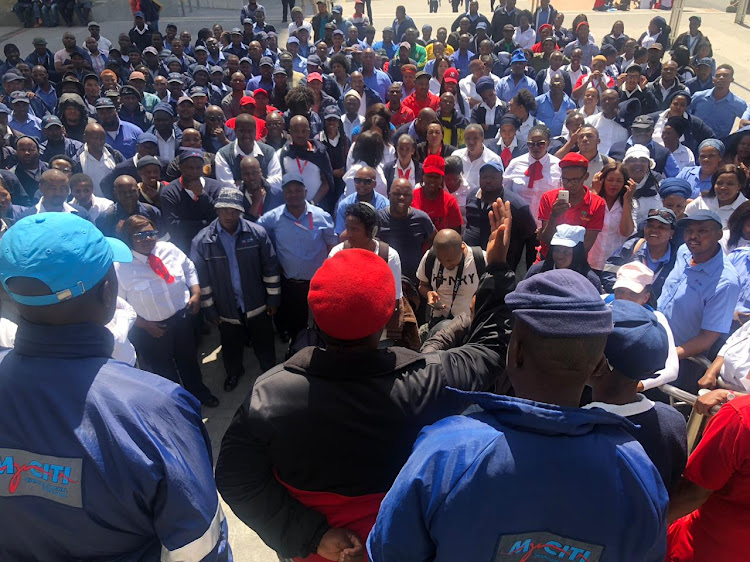 Police keep an eye on bus drivers and other staff employed by the MyCiti bus vehicle operating companies who are protesting outside the City of Cape Town's civic centre.
Image: Esa Alexander

The City of Cape Town is seeing red over the EFF’s involvement in the illegal MyCiTi bus strike.

EFF Cape metro secretary Banzi Dambuza wrote to party members on Monday urging them to support the drivers’ demand for the city to employ them directly. Dambuza said about 300 drivers were in talks with the party.

It was his call for aggressive tactics that got Brett Herron‚ the mayoral committee member responsible for transport‚ hot under the collar.

Dozens of drivers‚ cleaners and security guards protested outside the Civic Centre on Tuesday.

“We call on all the fighters to put on their militant approach‚” Dambuza wrote. “It’s time that we make sure that DA feels the presence of the EFF in full swing.”

Herron said he was dismayed by the EFF’s call. He said the drivers are employed by vehicle operating companies‚ not the city.

“Capetonians and our local economy are already suffering from an ailing rail service. This letter exposes the EFF’s political expedience at the cost of the commuters‚ bus drivers‚ and our local economy‚” he said. Dambuza accused Herron of being arrogant and uncaring about the workers’ plight. He said the EFF is “militant and radical by nature” and that party officials had tried to talk to Herron but he had refused to meet them.

“I can’t even mention him by name‚” said Dambuza. “Anyone who doesn’t not want to talk to the people cannot call himself a leader. We were called here by the workers. All they want is to be insourced. The EFF is anti-tenders‚ it is the cardinal pillar of the party. It is non-negotiable. All we wanted is for the workers to be listened to.”

Early morning commuters were left stranded in Cape Town due to an apparent strike by drivers employed by the MyCiTi bus service on Monday.
News
3 years ago

One of the shop stewards‚ Patrick Mabinda‚ said employees of vehicle operating companies contracted to MyCiTi had spoken to their employers about their grievances‚ which include poor salaries and spy cameras on buses‚ to no avail.

Mabinda said they then decided to accelerate the response to their grievances by embarking on an unprotected strike and taking the matter to the city. He also defended their decision to bring the EFF to the bargaining table.

“The EFF has achieved a lot of things in the country. Our union‚ Numsa‚ has betrayed us‚” said Mabinda.

“Our union representative was supposed to be here‚ he didn’t come. We are sick and tired‚ we want the city to insource us. They are the owners of these vehicles and the uniform we are wearing. People get dismissed for small things.”

On Tuesday afternoon‚ Herron said drivers were slowly returning to work. However‚ most routes were still not operational and it was unclear how long the strike would last. He urged the companies employing the drivers to resolve the grievances as soon as possible.

“Of great concern are reports of the intimidation of those bus drivers who are not participating‚ and who reported for duty this morning‚” he said.

“The intimidation was rife at the Civic Centre station in the central business district as commuters from Mitchells Plain and Khayelitsha were disembarking.”