Mkhwebane’s spat with her deputy plays out in parliament 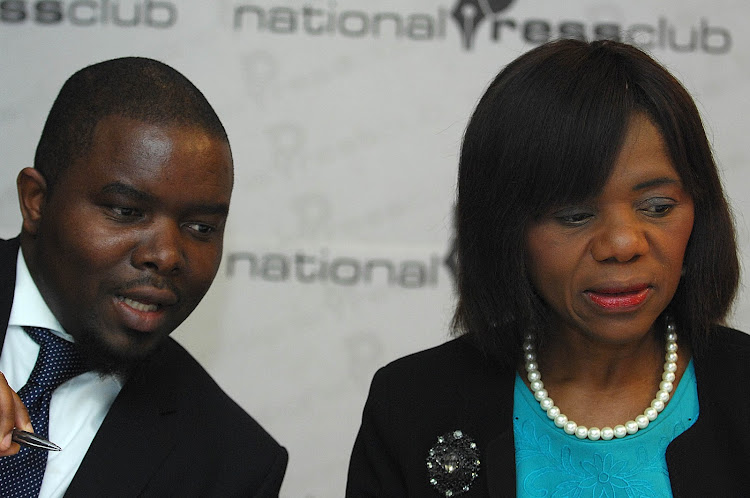 The frosty relations between public protector Busisiwe Mkhwebane and her deputy‚ Kevin Malunga‚ played themselves out in front of MPs as questions were raised about Malunga's role in that office.

And for the first time Malunga‚ a naturalised South African‚ spoke out about being sidelined because he does not have a top secret security clearance.

In a rare occurrence‚ Malunga appeared before the National Assembly's portfolio committee on justice - alongside Mkhwebane and their team - to account for the 2017/18 annual report. Opposition MPs were quick to raise questions about his presence considering that‚ unlike Thuli Madonsela‚ Mkhwebane has not been fond of bringing him along to parliamentary meetings.

It emerged that at one of the meetings earlier this year‚ Mkhwebane had also stopped Malunga's involvement in the office's investigative work because he does not have security clearance.

She confirmed on Thursday morning that she had written to National Assembly speaker Baleka Mbete and to the former chair of the justice committee‚ Mathole Motshekga‚ about Malunga's role in light of his vetting. She revealed that‚ as far as she was concerned‚ it was against the law for Malunga “to do the work”.

“I indicated that in my term these are the concerns I have as far as the laws of the country are concerned... as a committee and myself‚ must we violate those laws‚ especially on the fact that‚ is there work which needs to be done by Malunga when he doesn't have the security clearance?” said Mkhwebane.

She cited the Constitution‚ which establishes the State Security Agency and the National Intelligence Strategic Act as the laws that prohibited Malunga from doing sensitive work.

“I wanted to make sure that I am not violating the laws of this country‚” she added.

Mkhwebane said following the deliberations in one of the committee's meetings in March this year‚ she had gone back and delegated more work to Malunga who‚ until then‚ was responsible for staff training.

Malunga‚ responding to MPs' questions‚ said the insistence that he gets top secret security clearance was “lazy interpretation” and “lazy journalism” because as a naturalised citizen‚ he can only get such clearance after 20 years.

“I am a naturalised citizen and that's not unlawful in this country. It's a fairly valid way to acquire one's citizenship‚ you are not a criminal. [But] there has been a lot of lazy journalism in the way this is written about‚” he said.

“I have serious concerns about how there is so much lazy interpretation around this ... as if you are a criminal or something like that.”

Malunga said he had already been involved in “probably thousands” of investigative processes‚ adding that his term expires in December next year.

“So‚ as far as I am concerned‚ the horse has bolted‚ the ship has sailed. The issue is really about how do we finalise this term‚ the work has been done and it's about assisting the institution to get to the next level during the remainder of my term‚” he said.

He revealed that until the new delegations in April this year “there was a problem”.

“It was not correct for someone at my level to be doing that. With these delegations‚ I think we are working ….” he said‚ getting emotional.

Malunga is now responsible for overseeing the backlog of complaints which are two years and older‚ and also chairs a task team which monitors the speed with which investigations are moving and closing. He also does quality checking of all draft reports and notices that are sent to implicated parties for response. This is on top of training of investigators on procurement law.

Mkhwebane said Malunga's training of staff was “a very strategic process” in the organisation as it did not have resources.

MPs also raised concerns about a high turnover rate of senior staff in that office. This Mkhwebane had blamed on some of the lapses that have been highlighted by the auditor-general. While the office received an unqualified audit‚ it is technically insolvent and the auditor general highlighted going concern problems. He also raised issues of maladministration which related to procurement and contract management and failure to comply with the reporting standards of the Public Finance Management Act.

Mkhwebane had blamed the deviations on not having senior officials within the finance department and supply chain management‚ saying a senior manager in finance who was acting as chief financial officer had resigned at the end of July and that the lack of compliance in financial statements was a result of the capacity of that person‚ who “possibly decided to then jump the ship”.