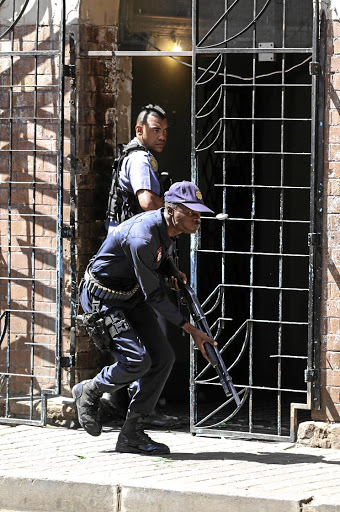 Dozens of residents of Hillbrow, in Johannesburg, have taken a stand against drugs in the area, raiding buildings and attacking alleged drug dealers.

Residents frisked people on the street they suspected of drug dealing in their campaign, called "operation shanyela".

The action started on Saturday when residents chased suspected dealers off the streets and confiscated drugs from alleged peddlers.

Several residents accused Nigerian nationals of selling drugs in full view of children on the flatland.

Community leader Mavis Ngcobo, 60, said they had complained to police on several occasions but their pleas fell on deaf ears.

"Police come here to chat and laugh with drug dealers. They then tell us that 'all is in order, there are no drugs here'. Police take bribes from drug dealers and when we take action, they shoot us with rubber bullets," Ngcobo said.

She said drugs were sold on O'Reilly Road 24 hours a day.

"We do not sleep. There is a group that works day shift, while the other works night shift. They light fires and sell drugs the whole night. Residents are hijacked and robbed when they return from work late.

"When we confront them [dealers] they tell us that they pay to operate here and that this is their territory. We decided to take matters into our hands and clean our streets because we are not getting help from police," Ngcobo said.

Fellow resident Philippine Matloa, 64, said she was worried that her grandchildren were exposed to drugs at a young age.

Hillbrow residents and police were involved in running street battles with each other on Saturday morning after people attacked flats believed to ...
News
3 years ago

An off-duty Johannesburg policeman was murdered in Hillbrow on Thursday afternoon.
News
3 years ago

"I am raising three girls aged six, eight and 13. I was shocked when they asked if I knew that Nigerian men are the ones with money. It pains me that my grandchildren witness these activities and they see that as a way to make money," Matloa.

"How are they going to value education if they see that people make money by selling drugs? Enough is enough. We no longer want drugs here."

Meanwhile, the Gauteng Shutdown Coordinating Committee, made up of residents of several coloured townships in the province, marched to the Johannesburg Stock Exchange (JSE) yesterday.

The committee was formed after weeks of violent protests in Westbury, also Johannesburg, over drugs and drug-dealing in the area.

The committee has claimed that coloured communities were being marginalised on many service delivery issues.

It demanded the inclusion of the coloured community in JSE programmes.

"The shutdown is meant to send a message to government that we are people of this country you have marginalised for a very long time," said Keith Duarte, a community activist from Eldorado Park, south of Johannesburg.