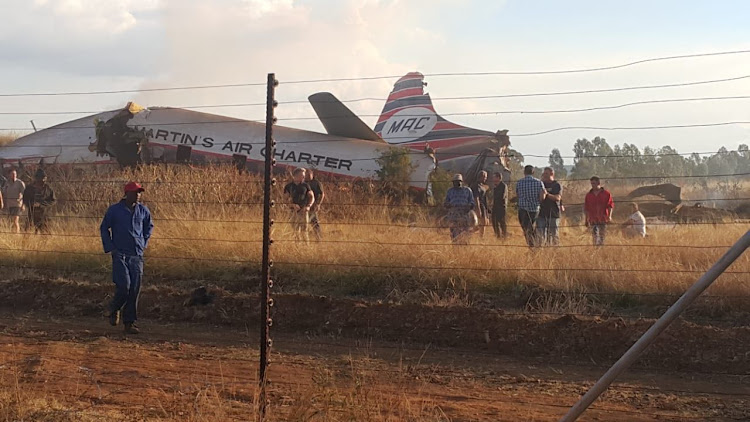 20 people were injured when an aircraft crashed on Sakabuka Avenue in Pretoria.
Image: Supplied

The largest aerospace museum in the Netherlands has expressed its shock at a plane crash that claimed the life of one person on Tuesday in Pretoria.

“We are extremely shocked that the Convair 340‚ the aircraft that was on its way to the Aviodrome‚ crashed during the takeoff of a test flight in South Africa. Our priority is now to securing the safety of all those involved‚” Aviodrome said in a post on Facebook.

The museum confirmed three of their personnel were slightly injured in the crash.

An aircraft crashed 1km east of the N4 in Derdepoort and about 8km east of the Wonderboom Airport on July 10 2018. One person was confirmed dead and 19 injured.

Aviodrome general manager Serena van Kammen is flying to Pretoria on Wednesday morning. One person died‚ two pilots are critical and a passenger has suffered a double amputation in the airplane crash north of the capital on Tuesday afternoon.

Civil Aviation Authority (CAA) spokesperson Kabelo Ledwaba said the authority would issue a statement on the crash on Wednesday.

Paramedic Xander Loubser from Best Care Ambulance Service confirmed the crash happened about 1km east of the N4 in Derdepoort and about 8km east of the Wonderboom Airport.

20 injured in plane crash outside Pretoria

About 20 people have been injured in an plane crash north of Pretoria.
News
3 years ago

According to Brandt‚ the plane was repainted in “the classic Martinair scheme for its imminent departure to its new home at the Aviodrome Lelystad in the Netherlands”.

He said the airplane was set to arrive in Europe on July 23.

“It is a pity that the titles have not been applied yet but I am still nevertheless ecstatic to be able to get some nice photos of this stunning old aeroplane one final time.”