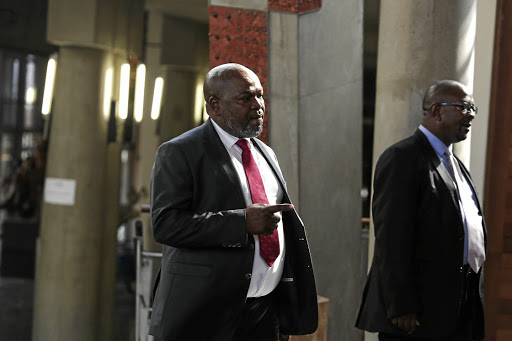 Former NPA head Mxolisi Nxasana enters the Constitutional Court in the Johannesburg, where the court ruled on August 13 2018 that the appointment of his successor Shaun Abrahams was unlawful.
Image: Alaister Russell

Former head of the National Prosecuting Authority (NPA) Mxolisi Nxasana needs to “find” the R10-million the Constitutional Court ordered him to repay on Monday.

“I have to find it‚” he said in an interview with Bongani Bingwa on Radio 702 on Tuesday morning.

The ConCourt ruled that Advocate Shaun Abrahams was invalidly appointed as the head of the NPA because he benefited from former president Jacob Zuma’s abuse of power. The court found that Zuma had used a R17.3-million “golden handshake” to get rid of Nxasana and ordered him to repay R10.2-million.

“It had become apparent to me that the president [Zuma] did not want me there any more‚” he told 702.

Nxasana added that he did not know the settlement was a “golden handshake”.

“I didn’t know it was improper‚ but in hindsight when I sought the opinion of my legal team‚ we all agreed the settlement agreement was invalid.”

Nxasana wanted to know why Justice Minister Michael Masutha was still in his job because he had signed the settlement agreement.

“He’s holed in his office. Nobody is challenging his involvement in that settlement agreement. I do not understand why that is.”

Nxasana also compared himself to other former NPA heads who resigned after getting “golden handshakes”.

“Advocate [Vusi] Pikoli left and he was also paid out. Nobody is questioning that payout.

"I am not saying that people should not question the payout I received‚” he added.

President Cyril Ramaphosa has 90 days to appoint a replacement for Abrahams.

South Africa’s highest court has ruled that Advocate Shaun Abrahams was not validly appointed to lead NPA.
News
3 years ago

The court ruled that it would not be in the interests of stability of the NPA to reappoint Nxasana‚ as he may face an inquiry into his fitness after agreeing to the illegal Zuma payout.

It is unclear if Ramaphosa will appoint an acting National Director of Public Prosecutions (NDPP) from the three deputy national directors‚ or whether he has already decided on the person he wants for the permanent post.

The deputy national directors eligible to act as the NDPP under the NPA Act are Willie Hofmeyr‚ Silas Ramaite and Nomvula Mokhatla.

Ramaphosa is considering whether to suspend the fourth deputy‚ advocate Nomgcobo Jiba‚ pending an inquiry into her fitness to hold office.

President Cyril Ramaphosa will on Tuesday announce who will act as the National Director of Public Prosecutions‚ pending his appointment of a ...
News
3 years ago
Next Article