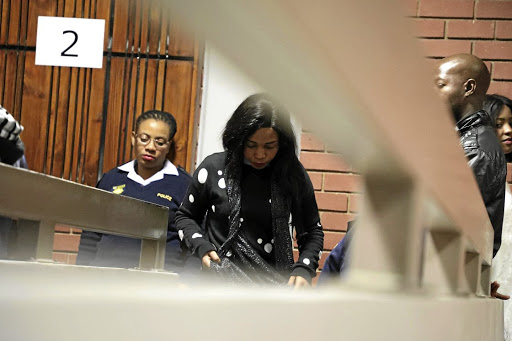 Malibyane Maoeng allegedly went on a shopping spree with the credit card of Dr Godfrey Dire, allegedly buying furniture worth R21000 and making cash withdrawals to the tune of R5000.
Image: THULANI MBELE

Malibyane Maoeng, 26, will face additional charges after another woman opened a case against her for using her identity document to obtain credit in her name.

Police spokesperson Mavela Masondo confirmed Maoeng will face more charges when she appears in the Benoni Magistrate's Court in two weeks. "We have added theft and fraud charges ... The investigation is ongoing."

This comes after Sophie Mofokeng from Kingsway near Springs on the East Rand discovered that her ID, which had been missing for over a year, was found in Maoeng's belongings by police during her arrest last month.

Mofokeng said she discovered when applying for a loan that she was blacklisted for unpaid accounts.

Police traced the address where the goods were delivered and it turned out to be the house of Maoeng's friend, Mofokeng said. "I fell for a trap when I tried to help Malibyane because she needed a place to stay at the time. Little did I know she would steal my ID and get me into debt."

Mofokeng was relieved her ID was found but still feared that Maoeng might have used her identity to commit more crimes.

Maoeng, who has been dubbed "the black widow", already faces charges of fraud for allegedly going shopping for furniture worth R21000 and withdrawing R5000 using Dire's credit card. This is after she had allegedly left him on his death bed in Sasolburg, Free State, in June.

Three men, including Dire, have been found dead with froth in their mouths after being last seen with Maoeng. They were all alleged to have been her lovers at the time.

Maoeng's sister Mone, 26, confirmed to police that she had been using fake names. She gave her real names as Nqolothi Aphacia Rahlao. originally from Lesotho.

Her bail application on Wednesday was postponed pending an investigation into her citizenship.