Mine 'sorry' for workers' deaths 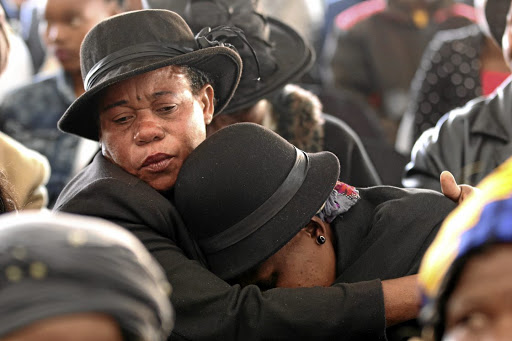 Family members comfort one another at the memorial service for the six mineworkers who died in an accident on duty at an operation owned by Palabora Mining Company in Phalaborwa, Limpopo.
Image: ANTONIO MUCHAVE

Six workers died when a conveyor belt caught fire in an underground shaft.

Unions have blamed the mine bosses for not prioritising the safety of the workers at the mine.

Clifford Zungu, a board member of the Palabora mine, said they would meet with the families of each of the deceased after the funerals.

Gwede Mantashe has ordered a speedy investigation into the cause of a fire that killed six miners.
News
3 years ago

"We know the loss of your relatives will take time to heal, and we are sorry about what happened," Zungu said in a short speech at the memorial service for the dead miners at the company's premises yesterday.

"We are under a dark cloud and we are pained by the incident in which lives were lost at our mine."

Speaker after speaker took a swipe at the management of the mine, saying it cared less about the lives of the workers.

Regional organiser of trade union Solidarity, Clifford Smith, said the deaths could have been prevented had the mine management taken precautionary measures. He described the deaths of the miners as "tragic and unnecessary".

Deputy president of the National Union of Mineworkers (NUM) Phillip Vilakazi said decisions of the mine management were only meant to serve their own interests instead of those of the workers.

Vilakazi called on the mine management to pay for the funeral costs of the dead miners.

"As NUM we want the mine to incur 100% costs of the funeral services of the miners. Over and above, we want families of each of the dead miners to be built a six-roomed house and garages with double doors as part of compensation," he said.

Vilakazi further called the company to continue paying salaries to the wives of the dead miners and also establish trust accounts for the families of the deceased.

'My boy's face was unrecognisable'
News
3 years ago

"All mines that killed workers must be suspended immediately. It is clear that the mines are no longer concerned about the safety of workers but only about their profits," Mathunjwa said.

He further called on mine bosses to be put behind bars for negligence which lead to deaths.

Chief of the Ba-Phalaborwa nation Andries Malatji called on the mine to pull up its socks to prevent more deaths.

Thabo Mokoena, the director-general of the Department of Mineral Resources, said they were worried about mine deaths, adding that they warranted action to be taken against mining companies.

He said 56 miners had died at work so far this year in South Africa.