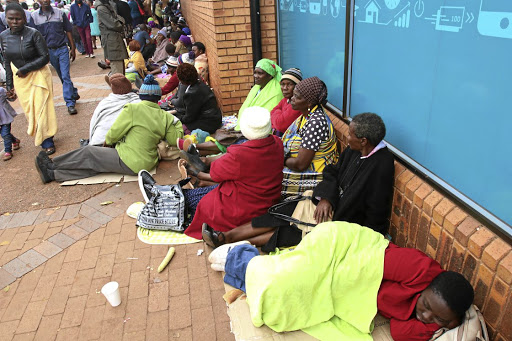 VBS Mutual Bank's customers queue outside the branch in Thohoyandou, Limpopo, hoping to withdraw some of their money for stokvels and burial societies.
Image: ANTONIO MUCHAVE

Individuals, burial societies, stokvels and savings clubs are to receive their money from the government after VBS Mutual Bank was placed under curatorship.

Yesterday, Reserve Bank governor Lesetja Kganyago announced that the government had provided the Reserve Bank with a guarantee to pay back the bank's clients, the majority of whom are poor women in Limpopo.

He, however, said the guarantee did not cover the municipalities that banked with VBS as well as corporate deposits.

Several municipalities in Limpopo and others around the country were clients of the bank.

The DA is calling for police to investigate allegations of bribery and corruption at VBS Mutual Bank.
News
4 years ago

"We have decided to use Nedbank to facilitate the repayments of retail depositors. The R1000 a day limitation will no longer apply as it did at VBS," he said.

"Once retail depositors had obtained their new Nedbank cards, they can choose to either leave their money in their new cards, withdraw all or part of the fund ..."

Kganyago said the government had provided a guarantee to the Reserve Bank to facilitate the repayment of all retail deposits up to R100 000 per retail depositor, starting from Friday.

He called on the depositors not to all rush at once to claim their funds as their money was secured.

"What has happened at VBS is a fraud. The fraud was committed by people watching over the institution," Kganyago said.

On March 11, Finance Minister Nhlanhla Nene placed the bank under curatorship. VBS has more than 20 000 clients.

Following the closure of the bank, long and at times overnight queues by mainly women were seen at the Thohoyandou branch of the bank.

It emerged that the bank was allegedly looted by its executives, and by the Venda King Toni Mphephu Ramabulana, who were living it up on the bank's dime.

They allegedly gave themselves loans and massive overdrafts for the purchase of luxury vehicles, helicopters, homes and shopping sprees at expensive fashion stores.

Yesterday, VBS curator Anoosh Rooplal confirmed earlier reports that an amount of R1.5-billion had been siphoned out of the bank.

"That is the amount we are looking to recover from the executives of the bank and high-profile people [who] benefited from the bank."

Rooplal said they were pursuing civil proceedings to recover assets from bank executives and high-profile people.