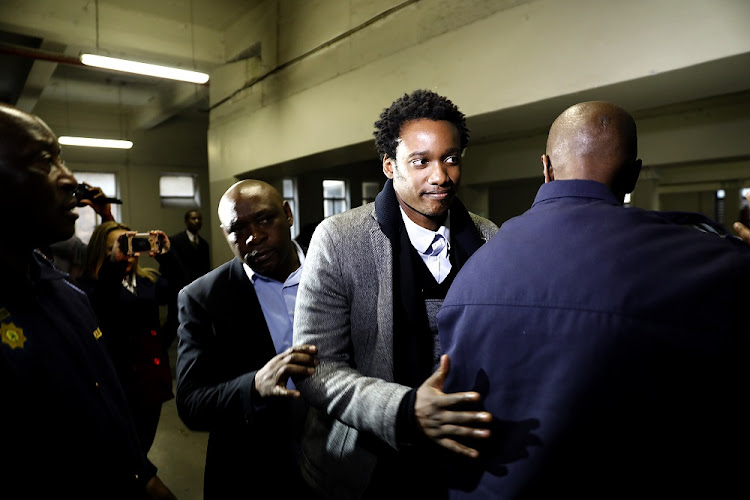 Duduzane Zuma arrives for his appearance at The Specialised Commercial Crimes Court in Johannesburg where he was released on a R100 000 bail.
Image: ALON SKUY

Duduzane Zuma, the son of former president Jacob Zuma, insists he is ready to face the corruption case against him "as soon as possible" and says it is "plain and undisputed that I am not guilty of any wrongdoing".

In an affidavit filed at the Specialised Commercial Crime Court in Johannesburg Zuma stated that he would plead not guilty to charges that he was involved in an alleged Gupta family plot to "buy" former deputy finance minister Mcebisi Jonas.

"I do not fear any conviction with reference to the said matter," he stated. "I am informed that the current charges apparently relate to allegations... that I was allegedly present when Mr Ajay Gupta made certain alleged proposals and promises to Mr M Jonas to become the new minister of finance on 23 October 2015. Apparently he also offered to pay him some monies."

He stressed that the allegations that had surfaced about that meeting made it clear "that I, in my personal and/or any other capacity, made no proposals of whatsoever nature to Mr M Jonas, either as alleged or at all".

The brother of the woman who died in Duduzane Zuma's 2014 car accident, said he was anxious ahead of his court appearance.
News
4 years ago

He further referred to sworn claims by Ajay Gupta that he had an "alibi" for the time when he was alleged to have met with Jonas and could prove this alibi with "cellphone records".

"I therefore do not fear any conviction based on these allegations, as I am innocent of the alleged charges levelled against me, and I will stand my trial as soon as possible to prove it. I point out that this charge has already been under investigation since March 2016, and as far as I am aware, I was never regarded as a suspect in the matter up until 6 July 2018."

Zuma has made it clear that he knows he may face further "state capture" charges or be called to give evidence at the Zondo Commission of Inquiry into State Capture.

In his bail affidavit, Zuma has also accused the Hawks of unlawfully arresting him "without a warrant of arrest" when he arrived in South Africa from Dubai last week.

He was at pains to point out that he had agreed to hand himself over to the authorities following this allegedly unlawful arrest and had "cooperated fully" with the authorities.

According to Duduzane, this showed that he was not a flight risk and should be granted bail.

Former President Jacob Zuma’s son Duduzane has been formally charged with corruption‚ his lawyer has confirmed.
News
4 years ago
Next Article