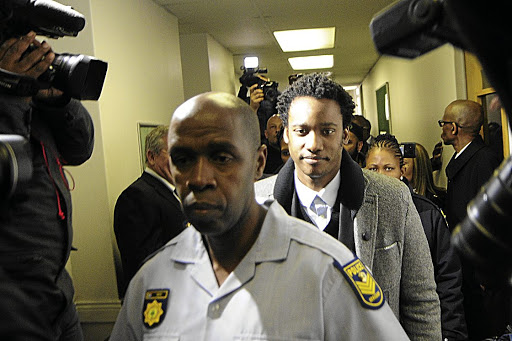 Duduzane Zuma appeared in the Specialised Commercial Crime Court yesterday and will be back in the dock tomorrow for culpable homicide.
Image: Thulani Mbele

The brother of the woman who died in Duduzane Zuma's 2014 car accident, said he was anxious ahead of the appearance of the former president's son in court on Thursday.

Zuma will appear in the Randburg Magistrate's Court to face two counts of culpable homicide related to the death of Phumzile Dube.

Dube, 34, was killed when Zuma's Porsche crashed into a taxi on the M1 highway in Johannesburg in 2014.

Pedzisane Dube, Phumzile's brother, told Sowetan yesterday he was relieved but anxious ahead of Zuma's appearance.

"It is not easy to talk about this because this matter has been going on for years and there was a time when it was quiet, and we didn't think this day would come," Dube said.

He said his sister's death had negatively impacted his mother's health and left her bedridden for some time.

"She doesn't know that he [Duduzane] is appearing in court because she is in Zimbabwe, and I don't want her to know about it until I am convinced something concrete will come of this," he said.

Yesterday, a leg-cuffed Zuma made a brief appearance at the Specialised Commercial Crime Court in Johannesburg charged with corruption, with an alternative charge of conspiracy to commit corruption.

The charges emanate from an alleged R600-million bribe offer made to former deputy minister of finance Mcebisi Jonas in 2015 by Ajay Gupta, in Zuma's presence.

He was granted R100 000 bail and ordered to surrender his passport to the investigating officer. The 34-year-old Zuma appeared relaxed as he was led into the dock.

His provisional charge sheet detailed that: "At this meeting, Mr Ajay Gupta in the presence of (Zuma) offered Mcebisi Jonas the position of finance minister, advising him that the current minister of finance was to be relieved of his position in cabinet. Mr Ajay Gupta further offered an amount of R600-million to be deposited in a bank account of his choice and R600 000 in cash to assist him and his companies in their business ventures with government."

"I think it's procedure," he said, later adding: "at least this may give me street cred."

Hawks spokesman Hangwani Mulaudzi was at pains to deny the unit's officers had pushed for Zuma to be shackled, and stressed that this was "standard procedure" at the Commercial Crime Court.

Mulaudzi was backed by Zuma's attorney Rudi Krause, who said Hawks officers had in fact tried to negotiate with court staff not to shackle him.

At least this may give me street cred.

"When the officer stated that, Mr Zuma said he did not want to be seen to be receiving special treatment and insisted he be shackled too," Krause said.

Magistrate Jeremy Jansen van Vuuren postponed the matter until January 24 for further investigation. Mulaudzi added that Zuma will need to make representations to the unit in the form of an affidavit if he wanted to leave the country.