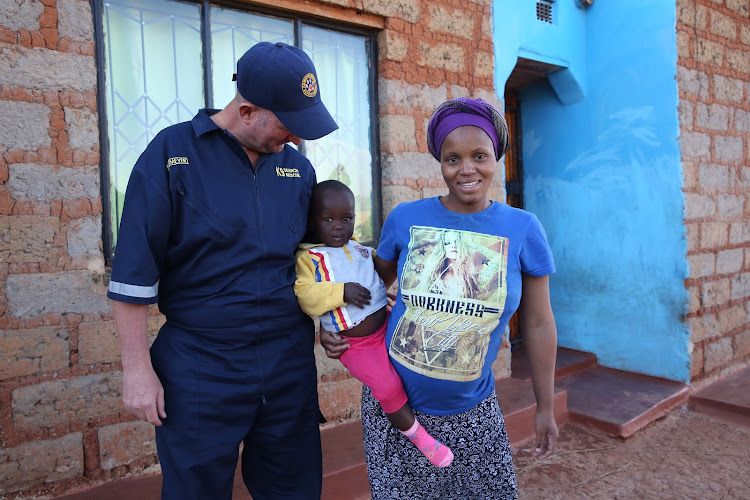 For veteran policeman Jacques Meyer‚ the search for missing toddler Nomfundo Mkhwanazi was driven by his love for his own son.

“When we found her and I had her in my arms‚ I was overwhelmed. It was the highest point in my career. I can only imagine what it must have been like for her mother because I am a parent myself‚” added the father of a 10-year-old.

The toddler disappeared from a homestead in Emmaus in the KwaZulu-Natal hinterland on Wednesday last week. She survived for more than 48 hours in the freezing winter cold at the crest of a mountain that rises above the landscape near her home.

How the toddler‚ who can barely walk without stumbling‚ covered over 2km of steep incline and treacherous terrain remains a mystery.

Reliving the moments when she’d last seen the toddler‚ her mother Sthombe Mkhwanazi told SowetanLIVE that her daughter had been playing with other children on a dirt road that flanks the homestead.

It has been 10 hours since Zinhle Khumalo* has been reunited with her young daughter at a Johannesburg police station.
News
4 years ago

“Nomfundo ran ahead of everyone. When I told Mlungisi to get her‚ he said she was gone. I went outside to go find her and I couldn’t find her. I looked everywhere — I looked in the forest and even ran all the way home and I still couldn’t find her‚” said Mkhwanazi‚ adding that her hope had been fading with every passing hour while her daughter was missing.

“The neighbours helped me look for her. We looked until 9pm and then we called the Bergville police. The K9 Unit arrived the next evening‚ searched for her and said they would come back in the morning. They came back the next morning and searched for her until they found her at the top of the mountain‚” she said.

Meyer was among of a team of hundreds of police‚ firemen and community members who scoured the hillside looking for the girl. He joined the search the day after Nomfundo had vanished.

The group had been forced to call off the search for the day because of failing light. “I told them we would come back early in the morning and we did that. We had begun our search when someone said they had heard cries on the mountain. A lot of the community were already up there and I went as well. While up there‚ we found her‚” said Meyer.

“She was so cold. We got her down to the vehicles and rushed her to the hospital‚” he said.

Nomfundo spent the weekend in the Emmaus District Hospital and was discharged on Monday afternoon.