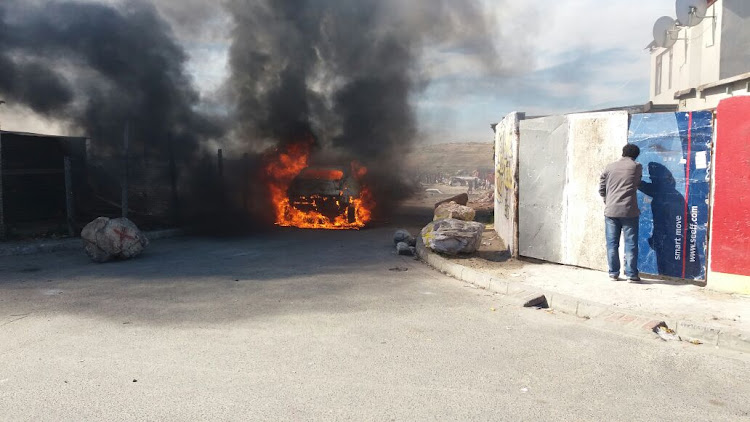 Earthmoving machines‚ a staff canteen and quad bike were petrol bombed by an angry crowd which attacked a landfill site after a thwarted land grab in Cape Town.

Law enforcement spokesperson Wayne Dyason said a ward councillor’s vehicle was torched after she tried to meet with disgruntled members of the community earlier in the day.

The petrol bombing incident followed a tense day in the area after a group of people were barred from illegally occupying land in Vrygrond.

“The city's Coastal Park Landfill site‚ which is adjacent to Vrygrond‚ came under attack from a group of people. Three heavy machines‚ a quad bike and a staff canteen were set alight by petrol bombs‚” said Dyason. Police‚ law enforcement and fire services were called to the scene.

Police spokesperson Captain Frederick van Wyk said a ward councillor went to investigate a possible fire in the area at noon on Sunday.

“Members of the community confronted the councillor‚ who was then joined by another councillor. The councillors were then intimidated and could not make their way back to their vehicle. The vehicle‚ a Toyota SUV‚ was then set alight‚” he said.

The councillors called for help and were escorted – uninjured but shaken – to safety by police.